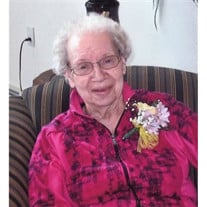 Ethel L. Sorum, age 89, of Spirit Lake, passed away Tuesday, June 16, 2015, at Hilltop Care Center in Spirit Lake. She was born in Lake Park, Iowa, to Stanley and Iva (Miller) Gregory. Ethel graduated from Excelsior High School in 1944. She was united in marriage to Marvin Sorum in 1949, in Lake Park. Marvin passed away October 25, 2010. Ethel was a member of Eastern Star, Daughters of the Nile, American Legion Auxiliary, V.F.W. Auxiliary and a fifty-year member of the Social Order of Beauceant. She enjoyed spending her spare time gardening, canning, playing cards and traveling, including many bus trips. Ethel is survived by her three children, Bruce Sorum, and his wife, Diane of Bellevue, Nebraska, Richard Sorum, and his wife, Therese of Omaha, Nebraska, and Nancy Jacobson, and her husband, Jim of Omaha, Nebraska; five grandchildren; seven great-grandchildren; brother-in-law, Merle and Kolleen Sorum of Spirit Lake; and several nieces and nephews. She was preceded in death by her parents; her husband, Marvin; and sister, Twylla (Glea) Lloyd. A memorial service will be held at 11:00 A.M. Wednesday, July 1, 2015, at the Schuchert-Lentz Funeral Home in Spirit Lake. Visitation will be held one hour prior to the service at the funeral home. Memorials may be given in Ethel's name to the Alzheimer's Association. The Schuchert-Lentz Funeral Home is in charge of the arrangements.

The family of Ethel Sorum created this Life Tributes page to make it easy to share your memories.

Send flowers to the Sorum family.