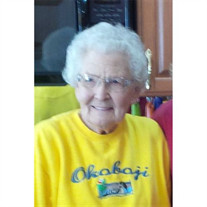 Eunice Ardelle (Rost) Baird, age 84, passed away on Tuesday, November 17, 2015, at Keelson Harbour Assisted Living in Spirit Lake. She was born on April 2, 1931, to William and Margaret (Gieser) Rost, at their farm home near Brandt, SD. She was baptized at the church in Brandt, SD, and confirmed at the United Church of Christ in Hartley. In 1934, the family moved to a farm northwest of Everly, IA, and then to a farm northwest of Hartley in 1936, after a tornado destroyed their homestead. In 1940, they moved back to the restored farm northwest of Everly. She completed her elementary education in rural schools and attended high school in Everly, graduating in 1949. In 1949, while working at Red's Café in Hartley, Eunice met Robert Baird and on April 3, 1951, and they were united in marriage in Jackson, MN. They were blessed with 4 daughters, Monica, Marlene, Cynthia, and Theresa. During their married life, they lived in Hartley, Phoenix, AZ, Spencer, rural Everly, Arnolds Park, Milford, and Spirit Lake, as she and Bob built and remodeled numerous homes, finally ending at the current residence in the Harbor on West Okoboji. Over the years, she worked in a number of different businesses, the longest being her final position as clerk and deputy treasurer of Dickinson County, a position she held for 30 years. During that tenure, she helped to move the tax collection function from a manual process to the first uses of electronic data processing. Retiring at 64, she filled her time mostly with family, which was her greatest passion in life. She also kept busy by working at Clay County Fair in Spencer, as an election official in Dickinson County, and as a volunteer Pink Lady at Lakes Regional Hospital with a Life Time Membership and over 3,000 hours worked. The family recalls Eunice and Bob as the center of the family gatherings, which were planned and orchestrated numerous times throughout the year. They always thought first of their children, grandchildren, great-grandchildren, sisters, brothers, nieces, and nephews. Their door was always open to any and all who could join them for whatever the current holiday or event was at hand. Food and refreshments were always plentiful at their table and all who crossed their doorstep were asked to join in. Only one caveat ever existed in the household..... Don't sit on the beds! Eunice was preceded in death by her beloved husband, Robert, on February 29, 2012, their infant daughter, Marlene, in 1954, step-grandson, Tim Kuiper in 2013, her parents, three sisters, one brother, their spouses, one niece, and two nephews. Left to cherish her memory are her daughters and their husbands, Monica and Doug Beving of Sioux City, Cynthia and Terry Jensen of Spirit Lake, Theresa and Jim Kuiper of Canton SD; her grandchildren and their families, Chass and Kari Beving of Dakota Dunes in SD, Christopher Ingraham of Spirit Lake, Amy Hammerstrom of Sioux City, and Joshua and Michelle Ingraham of Spotsylvania VA; nine great-grandchildren Skylar, Marcus, Natalie, Hunter, Jack, Casey, Ryan, Sidney and Jenna; and her step family, grandchildren, Michelle Kuiper, Tom and Cindy Kuiper, Sharee and Dave Green, Jacy Jensen, and great-grandchildren Cade, Alexis, Kendal, Kylan, Jordan, Tyler (Bridget), Trevor, and Tatum and great-great-granddaughter, Sloan; 12 nieces, nephews, and their families; a host of friends and extended family members.....and Buffy, her faithful Maltese. Funeral services will be held at 11:00 A.M., on Monday, November 23, 2015, at the First Presbyterian Church in Spirit Lake. Graveside services will be held at 2:45 P.M., on Monday at Pleasant View Cemetery in Hartley. Visitation will be held on Sunday, November 22, 2015, from 3:00-5:00 P.M., at the Schuchert-Lentz Funeral Home in Spirit Lake. Memorials may be directed to the family or the Lakes Area Hockey Association.

Eunice Ardelle (Rost) Baird, age 84, passed away on Tuesday, November 17, 2015, at Keelson Harbour Assisted Living in Spirit Lake. She was born on April 2, 1931, to William and Margaret (Gieser) Rost, at their farm home near Brandt, SD. She... View Obituary & Service Information

The family of Eunice A. Baird created this Life Tributes page to make it easy to share your memories.

Send flowers to the Baird family.