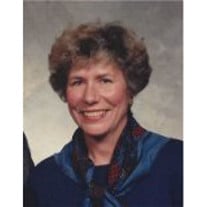 Frances "Fran" Miller, 78, of Spirit Lake, formerly of Britt, died Wednesday, November 27, 2013 at the Hilltop Care Center in Spirit Lake. Memorial services will be held 11 A.M., Tuesday, December 3rd, at the United Methodist Church in Britt with Rev. Robert Dodge officiating. Inurnment will be in Evergreen Cemetery in Britt. A memorial visitation will be held from 4 to 6 P.M., Monday at the Schuchert Funeral Home in Spirit Lake. Cataldo Funeral Home in Britt is in charge of local arrangements. Frances Joan Miller, the daughter of Edward and Beth (Powell) Wilimek, was born April 14, 1935, in Alleman, Iowa. She graduated from Newton High School in 1952, and attended the University of Iowa, where she received her B.A. degree in 1957. On September 9, 1956, she was married to Larry Miller in Newton. They lived in Des Moines until 1958, when they moved to Britt. Fran was a homemaker and active community member in Britt, serving on the School Board, volunteering for "Meals on Wheels," and participating in the local theatre group. She owned and operated "Tadpole," a children's clothing store in Britt. Cooking, gardening, reading, and playing bridge were some of her pastimes and she had a delightful sense of humor. Fran loved being with her family and friends and enjoyed entertaining at home. She later acquired her real estate license and joined her husband, Larry, in the family real estate business. Fran joined Hoein Realty in 1994 in Spirit Lake, when she and Larry relocated to the Iowa Great Lakes area. She was a former member of the United Methodist Church in Britt. Fran is survived by her three children, Sandra (Pete) Wroblewski of Wheaton, IL, David (Laura) Miller of Excelsior, MN and Amy (Dr. Randy) Pas of Arnolds Park; six grandchildren, Peter and Kaye Wroblewski, Hannah and Nicole Miller and Tara and Samson Pas; a sister, Louise (Ralph) Leutenegger of Mequon, WI; and two brothers, Frank (Ruth) Wilimek of Tempe, AZ, and Jim (Kay) Wilimek of Des Moines. She was preceded in death by her parents; and husband, Larry on February 18, 2005.

The family of Frances J. Miller created this Life Tributes page to make it easy to share your memories.

Send flowers to the Miller family.