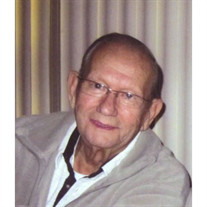 Francis Daly, age 82, of Okoboji, passed away Saturday, August 1, 2015, at Lakes Regional Healthcare in Spirit Lake. He was born on January 26, 1933, in Okoboji, to Jay and Goldie (Kenison) Daly. Francis graduated from Arnolds Park High School in 1950. He served his country in the United States Army from 1951, until 1955. Francis was united in marriage to Coretta "Corky" Johnson on November 3, 1953, in Jackson, Minnesota. Corky passed away on October 12, 2011. Francis worked for the Des Moines Register as a District Manager for many years. He enjoyed spending his spare time with his family, gardening, fishing, watching the Hawkeye's, going to the casino and making candy. Francis is survived by his five daughters, Dona Larson, and her husband, Randy of Milford, Ronda Rogne, and her husband, Steve of Hartley, Diane Huse, and her husband, Bob of Arnolds Park, Teresa Dwyer of Puyallup, Washington, and Connie Schroeder, and her husband, Mark of Emmetsburg; son, Dennis Daly, and his wife, Vrenae of Milford; 18 grandchildren; and 17 great-grandchildren. He was preceded in death by his parents; his wife, Corky; three brothers; and a sister. A memorial service will be held at 11:00 A.M. Thursday, August 6, 2015, at the Schuchert-Lentz Funeral Home in Spirit Lake. A memorial visitation will be held Wednesday, from 4:00 P.M. until 6:00 P.M. at the Schuchert-Lentz Funeral Home. Burial will be at the Okoboji Cemetery in Arnolds Park. In lieu of flowers, memorials may be given in his name.

The family of Francis Daly created this Life Tributes page to make it easy to share your memories.

Send flowers to the Daly family.