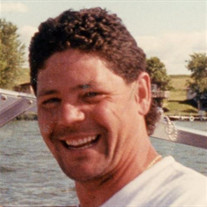 Francis Koenig Petska, 53, of Milford, IA passed away on Tuesday, November 7, 2017 in Milford, IA. A celebration of life will be held at 10:30 a.m. on Saturday, November 18, 2017 at St. Joseph Catholic Church in Milford, IA. A visitation will be one hour prior to the service on Saturday at the church. Burial of his cremains will be at a later date. Francis was born December 1, 1963 in Omaha, NE to parents Francis J. Petska and Sandra L. (Koenig) Petska. He graduated from Spencer High School in 1981. In August of 1995 he was married to Sandra Somers on the Queen in Okoboji. To this union triplets were born on October 7, 1999. As a family they enjoyed many vacations which included a trip Disneyland and Cruise Lines. He enjoyed all water activities especially boating, scuba diving, fishing and camping. One of Francis’s most recent highlights was taking a trip with his children Michael and Autumn to Columbia, SC to Celebrate his son Cody graduating from basic training from the US Army on August 17, 2017. Francis was talented at carpentry and did maintenance work at a college in Blair, NE. He was a loving father and will be missed by all three children Autumn, Cody and Michael of Milford, IA; he is also survived by his sister Traci Hintz of Spencer, IA; half siblings Gary Gable of Omaha, NE; Shelia Casanova of Minneapolis, MN; Pamela Hyatt and Nancy Kaminsky of Banning, CA; and Andrea Petska of Cincinnati, OH; father and stepmother Frank and Janet Petska of Spencer, IA; and stepsister Katie Clark of Oklahoma City, OK. Also left to cherish his memory are many nieces, nephews, cousin, extended family members and many friends. He was preceded in death by his mother Sandra McKelvey and his grandparents. I lieu of flowers the family requests memorial donations may be sent to the Francis Petska Memorial Fund at Farmers Bank, 2121 Okoboji Ave., Milford, IA, 51351.

The family of Francis Koenig Petska created this Life Tributes page to make it easy to share your memories.

Francis Koenig Petska, 53, of Milford, IA passed away on Tuesday,...

Send flowers to the Petska family.