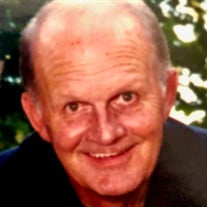 Gary M. Piper of Okoboji, IA, passed away on Monday, February 1, 2021, at the age of 80, after an ongoing battle with health issues. Gary was born to Waldo and Florence Piper on April 7, 1940 in Sioux City, IA, joining his brother Wally, who was 11 years older and later became his high school football and basketball coach. After graduating from Central High School, he attended Morningside College on a football scholarship. In 1963, Gary married his high school sweetheart and love of his life, Judy Compton. Together they jetted off to Fremont, CA, to start their lives as newlyweds, returning years later to the Lakes region to raise their children, son Casey and daughter Cory. Gary was in the insurance business for over 40 years. In the community, he served as an elder at Presbyterian Church and was later a member of Good News Church. He was a member of Kiwanis and the Iowa Navy Commodores and was instrumental in starting the annual Abben Cancer Golf Classic at Emerald Hills Golf Club. Gary loved playing golf, eating a good hot dog, and enjoying his morning coffee while visiting with his beloved by their bay window– or with his friends around town. More than anything, Gary loved his family. His children and his six grandchildren were the center of his life. There was never a better “Papa.” His love affair with his best friend and wife, lasted until the day he died. Gary is survived by his wife Judy of 57 years; son Casey (Laura) Piper of Naperville, IL, and their children, Cullen, Jack, Shaye and Drake; and daughter Cory Piper of Minneapolis, MN, and her daughters, Paige and Kit; along with other extended family members. He is preceded in death by his parents, brother, sister-in-law, Fran Piper and niece Jodi Piper Bappert. A Celebration of Gary’s Life will be planned for later this summer.

Gary M. Piper of Okoboji, IA, passed away on Monday, February 1, 2021, at the age of 80, after an ongoing battle with health issues. Gary was born to Waldo and Florence Piper on April 7, 1940 in Sioux City, IA, joining his brother Wally, who... View Obituary & Service Information

The family of Gary M. Piper created this Life Tributes page to make it easy to share your memories.

Send flowers to the Piper family.