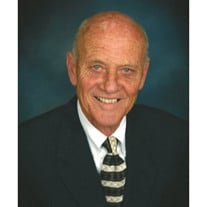 Gary Robert Tenold, the son of Alton and Carma (Reinsmoen), was born November 21, 1941, in Forest City, Iowa. He graduated from Joice High School in 1959, and attended North Iowa Community College in Mason City, Iowa as well as South Dakota State College in Brookings, South Dakota and graduated from Dallas Institute of Mortuary Science in Dallas, Texas in 1963. He married DeEtta Schleusner on September 3rd, 1960, and to this union four children were born. Gary served funeral homes in Oelwein, Iowa and Fort Dodge, Iowa, before he purchased a funeral home in Spirit Lake, which he and his wife, Dee, operated until 1980. They moved to Belmond, Iowa and purchased funeral homes in Belmond and Klemme, Iowa. They operated these funeral homes until Gary retired in 2001. They moved back to Spirit Lake, but Gary could not stay retired. He began a part time relationship with Schuchert Funeral Home for the next several years. He loved the funeral business and the service he provided to thousands of families for over 45 years. Gary was active in the Catholic Church by serving on the parish council and teaching religion classes. He was also a Eucharistic Minister and usher for many years. He was past president of the Chamber of Commerce, served 6 years on the Belmond Hospital Board as Trustee and was an active member of the 3rd and 4th Degree Knights of Columbus, serving 2 terms as Grand Knight. Gary enjoyed playing golf, working in his wood shop and on the computer, as well as hunting and fishing with friends and family. He loved teaching his grandchildren how to hunt and he especially liked building things in the wood shop for all of his family. The past six years, Gary and Dee enjoyed getting out of the cold and being "Winter Texans." Surviving are his wife, DeEtta of Spirit Lake, Iowa; daughter, Kim Ingwersen, her husband Mark and their children Dr. Laura Ingwersen of Spirit Lake and Sarah Fonken and her husband, Brandon and son, Brayden of Jewell, Iowa; son, Dr. Scott Tenold and his wife Dr. Lisa and their children Jake and Cole, of Chippewa Falls, Wisconsin; daughter, Kristi Funk and her fiancé, Bruce of Woodbury, Minnesota and her children Austin of Spirit Lake, Iowa and Garrett of Milford, Iowa: and son, Dr. Steven Tenold and his four children, Mackenzie, Cael, Carson and Cade of Belmond, Iowa. He is also survived by his sister, Gloria Goll of Klemme, Iowa; brother Arlyn Tenold and his wife, Judy of Joice, Iowa; and many nieces and nephews. Preceding him in death are his parents, grandson Wesley, and brother-in-law, Lyle Goll. A funeral Mass will be held on Thursday, April 25, 2013, at 10:30A.M. at St. Mary's Catholic Church in Spirit Lake. Visitation will be held Wednesday, from 4:00P.M. until 7:00P.M., with a scripture service at 7:00P.M. at the Schuchert Funeral Home. Burial will be at St. Margaret's Cemetery.

The family of Gary Tenold created this Life Tributes page to make it easy to share your memories.

Gary Robert Tenold, the son of Alton and Carma (Reinsmoen), was...

Send flowers to the Tenold family.