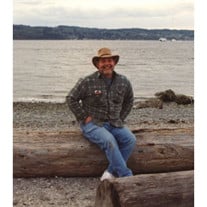 George Jacob Gabel, born April 30, 1950, Des Moines, Iowa, passed away quietly January 9, 2015, Spirit Lake, Iowa. George was the 2nd in a family of five siblings, which relocated from Des Moines to Okoboji in 1960, when father Jacob launched a new furniture manufacturing business in Milford -- an extension of his 10-year-old, Des Moines-based company. All children attended Milford public schools until 1966, when the family moved to Seattle, Washington. George returned to Spirit Lake, graduated from public school there and started a family. His first child, Jennifer Gabel Pangburn, still lives there, works for Spirit Lake Hospital and raises her own family. George later returned to the Seattle area and started another family. His son Jason, now lives in Everett, Washington with his own family. George worked most of his life like his father, as a furniture maker, either for various concerns or independently. 2014, he retired as a valued team member of the internationally renowned Kaas Tailored, furniture design and manufacturing company, Mukilteo, Washington. Summer 2014, George returned to Iowa with his wife, Cynthia (also from the Okoboji region) to a modest acreage in Peterson, down along the Little Sioux River, where he'd planned his retirement, fixing up a hundred-year-old farm house, hunting, fishing and relaxing with family and friends. But alas, it was short lived, as a recurring bout with cancer took its toll. George Gabel leaves a legacy extending to 5 grandchildren, 5 great grandchildren, plus 2 step grandchildren and 3 step great grandchildren, Immediate survivors include wife, Cynthia Fales-Gabel, daughter, Jennifer Gabel Pangburn, son, Jason Gabel, brothers, Jack and Jeff Gabel and sisters, Debbie Reiter and Mickey Sutton. George's passing is preceded by his father Jacob Gabel (1911-1988) and mother, Mabel Evart (1925-1998). A memorial service will be held at 11:00A.M. Tuesday, January 13, 2015, at the United Methodist Church in Spirit Lake. In lieu of flowers, memorials may be given in George's name. The Schuchert-Lentz Funeral Home is in charge of the arrangements.

The family of George Gabel created this Life Tributes page to make it easy to share your memories.

Send flowers to the Gabel family.