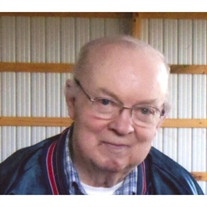 Gerald Walter Koenig, the son of William Paul and Ingrey Marie (Jensen) Koenig, was born February 3, 1930, in Blair, Nebraska. He moved to Gillette Grove, Iowa, at the age of fourteen. He met and married Janet Margaret O'Hearn. He helped on the farm until he joined the Army and served in the Korean War. After returning from the war, he farmed for some time. He then moved his family to Pomoma, California, for a short time only to return to the Iowa land he loved. At that time, he worked in the fertilizer industry in Sioux Rapids, Iowa. He soon moved his family again to Spencer, opening his own fertilizer company known as K & B Fertilizer. After a number of years in the fertilizer industry he did a variety of things including driving truck for Stylecraft and driving Winnebago's to dealerships enjoying the countryside. Eventually, he landed in Carthage, MO. where he ran a motel. After several years, he returned again to Spencer. Gerald enjoyed reading the newspaper, spending time with his family, and watching Wheel of Fortune. Gerald passed away on February 18, 2015, in Spencer, Iowa. Preceding him in death were his parents; daughters, Nancee and Susan; and grandson, Gerald Edward "Eddie". Left to cherish his memory are his wife, Janet Koenig; his brothers, William (Joan) Koenig and George (Darlene) Koenig of Gillette Grove, IA; sons, Greg Koenig and Gerald "Ed" (Brenda) Koenig; and daughters, Mary Goyette (Randy) Goyette of Lincoln, NE, Ann Dodge (Danny) and Lisa Hansen (Randy) all of Spencer, IA, Martha Goodenow (Gavin) of Arvada, CO, Sara Harris (Doug) of Phoenix, AZ and Tina Miller (Paul) of Manteca, CA.; twenty grandchildren; sixteen great-grandchildren; and many nieces and nephews. A graveside service will be held at 11:00A.M. Saturday, February 21, 2015, at Northlawn Cemetery in Spencer, Iowa. The Schuchert-Lentz Funeral Home is in charge of the arrangements.

Gerald Walter Koenig, the son of William Paul and Ingrey Marie (Jensen) Koenig, was born February 3, 1930, in Blair, Nebraska. He moved to Gillette Grove, Iowa, at the age of fourteen. He met and married Janet Margaret O'Hearn. He helped on... View Obituary & Service Information

The family of Gerald W. Koenig created this Life Tributes page to make it easy to share your memories.

Send flowers to the Koenig family.