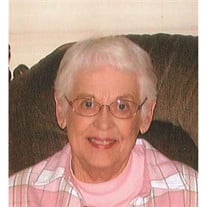 Geraldine Gano, age 84, of Spirit Lake died on Saturday August 30, 2014 at the Hilltop Care Center in Spirit Lake. A Memorial Mass will be held 10:00 AM Saturday September 13th at St. Mary's Catholic Church in Spirit Lake. Geraldine Mary McCarthy, the daughter of Maurice and Lydia (Seyer) McCarthy, was born on November 25, 1929 in Royal, Iowa. She graduated from Cherokee High School in 1948. On September 20, 1974 Geraldine was united in marriage with Perry Gano in Elk Point, South Dakota. They moved to Spirit Lake in December 1974 and bought OK Hardware. They sold the business in 1980, retired and spent most of their time in Mesa, Arizona. Geraldine moved back to Spirit Lake in 2008.Geraldine was a member of St. Mary's Catholic Church. She enjoyed golfing, counted cross stitching and spending time with her friends and family. Left to cherish Geraldine's memory are four daughters, Jane Peters and her husband Jeff of Yuma, AZ, Julie Dickey and her husband Bob of Bradgate, Jeannie Leinbaugh of Phoenix, AZ and Janel Boever and her husband Mark of Worthington, MN; two sons, Jim Leinbaugh and his wife Patty of Spirit Lake and John Leinbaugh and his wife Susie of Plano, TX; twenty three grandchildren; fifteen great grandchildren; and a brother Tim McCarthy and wife Kitty of Vancouver, WA. She was preceded in death by her parents; husband, Perry in 2002; one brother, Jim McCarthy; and two sisters, Colleen Skoglund and Kathleen Roberts.

The family of Geraldine Gano created this Life Tributes page to make it easy to share your memories.

Send flowers to the Gano family.