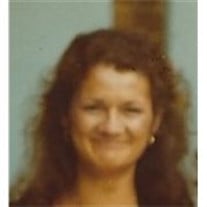 Geralyn "Lyn" Elizabeth Johnson was born April 10th, 1952 to Donald Frank and Mary Lavone (Leddy) Johnson in Watertown, South Dakota. Lyn attended Watertown and Hayti South Dakota schools and she was the first graduating class from the all girls High School Harmony Hill in Watertown. She married Lyn Stormo and from that union a son was born. After the death of her son, at her young age, she left and went to New Orleans, La. and worked at a convent with one of the first Head start Programs. Lyn has worked as a manager in Minneapolis, Mn. area at a Walden Book Store, a telephone operator for AT & T, and while living in Reno, Nv, worked at Marshalls Department Store. She then moved to Cherokee, Iowa in the late '80s and has resided the last several years at Spirit Lake, Iowa. Lyn fought a brave battle against lung cancer and a brain tumor. Lyn passed away on August 19th 2015 in Spirit Lake, Iowa. Services are Saturday September 5th at 10:00AM. Burial will be at St. Mary's Cemetery following the Ceremony in Watertown, S.D. The Schuchert-Lentz Funeral Home in Spirit Lake is serving the family. Preceded in death are her grandparents; Frank & Violet Johnson and Michael & Matilda Leddy; a son Donnie James; and father Donald Frank Johnson. Lyn is survived by her mother Mary of Henry, S.D; brothers, Terry Johnson of Cherokee, IA, Rick (Joanne) Johnson from Blue Springs, MO and Greg (Jane) Johnson of Reno, NV; sisters, Debbie (Larry) Borkhuis of Henry, SD, and Dawn (Joe) Dosch of Henry, SD; and 19 nieces and nephews. Blessed be her memory.

The family of Geralyn Johnson created this Life Tributes page to make it easy to share your memories.