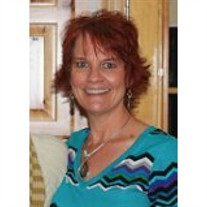 Gerri Lynn Moser was born in Guttenberg on September 20, 1963 to Clark and Janet Moser. She was the fourth child in a family of six, she was mother to two, and she cared deeply for her numerous four-legged companions. Gerri was baptized and confirmed at St. John's American Lutheran Church. She graduated from Guttenberg High School with the class of 1982 and received a B.A. from the University of Northern Iowa. She lived with passion for the present, with hope for the future, and with deep love of all living things. Gerri's siblings describe her growing up in the 1970's wearing smock tops hand-sewn and hand-embroidered by their mother. She was a slender, athletic girl; the fastest runner in the neighborhood - the one picked first for kickball, Annie Annie Over, snowball fights, 500, and chase. She hurled herself off of Benskin's dock on hot summer days; in winter, she fearlessly flew down the riverbank on a sled. As a young girl, Gerri loved night crawler hunting, catching crawdads in the creek, and capturing snakes over the riverbank (later put down her sister's shirt). She could run barefoot down a gravel alley and eat sour stalks of rhubarb or green grapes from nearby gardens. She was pals with the neighborhood dogs, Barney, King, Cocoa, and Snooper. Her sisters had to get up early to keep up with her; running out the back door behind her before it slammed shut and chasing her up the alley toward whatever adventure the neighborhood held that day. It seemed as though Gerri always knew how to find a good adventure. In reality, she was the one creating them. Gerri loved to dance. She loved a bargain and she loved scary movies. She wasn't fully dressed without jewelry (and lots of it). She taught her daughter that your purse should always match your shoes, and she instilled both of her children with a sense of confidence, independence, and self-worth. She was blessed with a network of supportive friends with whom she shared the many experiences that made up her very full life. To know Gerri was to know her intense passion for animals. She adopted many pets of her own and played foster-mom to at least six dogs before finding them forever homes. One winter, Gerri noticed a dog chained outside with only a small plastic carrier for shelter. She offered to buy the dog from the family. When they refused, she returned with a doghouse, straw, and dog toys. Gerri never missed a meal, and she always saved room for dessert - especially chocolate. She was adamant (and correct) in her belief that fruit, yogurt and pudding do not count as dessert. She also never missed a family gathering. Gerri's youthful energy and spunk punctuated every Christmas, Thanksgiving, and weekend visit. Her competitive spirit shined during hours spent playing BINGO with her mother, children, siblings, nieces and nephews around the dinner table. Gerri spent the final weeks of her life at home, surrounded by both her human and her canine family. She is survived by her daughter, Rachael (Jonathan); her son, Isaac; her adopted daughter, Amanda Nielson; her dogs Luka and Bub, her mother, Janet; five siblings, Sherri (Jeff) Erthum, Terry (Lois) Moser, Perry (Joyce) Moser, Kerri (Tom) Hutchinson, and Merri (Barry) Stephenson, and their children and grandchildren. On Thursday, Nov. 21, Gerri left the arms of her loved ones to join her father, Clark, and the group of smiling dogs, tails wagging, who have been loyally waiting to resume their walk beside her. She lived vibrantly everywhere the road took her - Oklahoma, Texas, Hawaii, New York, and throughout Iowa. Her wicked sense of humor endured throughout her life. If Gerri were here today, she would tell it like it is, without a sugar coating, but always with a hug. She would remind us that even if things aren't perfect, they can be. Services will be Friday, Nov. 29, with visitation at 10:00 a.m., funeral services at 11:00 a.m., and lunch to follow at St. John's Lutheran Church in Guttenberg. Guests are encouraged to show their support for the fight against colon cancer by wearing blue. In lieu of flowers, the family has requested donations in memory of Gerri to your local animal shelter.

Gerri Lynn Moser was born in Guttenberg on September 20, 1963 to Clark and Janet Moser. She was the fourth child in a family of six, she was mother to two, and she cared deeply for her numerous four-legged companions. Gerri was baptized and... View Obituary & Service Information

The family of Gerri L. Moser created this Life Tributes page to make it easy to share your memories.

Send flowers to the Moser family.