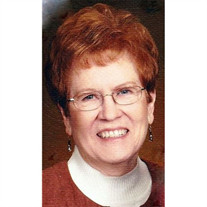 A FUNERAL SERVICE FOR 81 YEAR OLD GERRY GRIFFITHS OF OKOBOJI, WILL BE HELD AT 11:00A.M. THURSDAY, DECEMBER 18, 2014, AT THE FIRST CHRISTIAN CHURCH IN SPENCER. VISITATION WILL BE HELD WEDNESDAY, FROM 5:00P.M. UNTIL 7:00P.M. AT THE SCHUCHERT-LENTZ FUNERAL HOME. BURIAL WILL BE AT LAKEVIEW GARDENS CEMETERY. IN LIEU OF FLOWERS, MEMORIALS MAY BE GIVEN IN GERRY'S NAME. Geraldine, "Gerry," Griffiths was born on a farm north of Everly, Iowa, on February 20, 1933 to Chris and Ora (Lighter) Tuschoff. She went to be with the Lord on December 13, 2014, at St. Mary's Hospital - Mayo Clinic in Rochester, Minnesota, surrounded by her husband and children. Being raised on farms in the Everly & Moneta areas, she later attended and graduated from Gillette Grove High School. After studying Home Economics at Iowa State University for one semester, she married Robert Griffiths on December 27, 1952. They lived in Storm Lake while Bob attended Buena Vista University then moved to Ft. Smith, Arkansas & Ft. Sill, Oklahoma, where Bob served in the United States Army. The next destination was Iowa City & the University of Iowa. After a quick stay in Davenport, they made their way to Okoboji, IA, in 1963, where they raised their three children. Her beautiful home was a demonstration of her beautiful spirit, being able to watch the deer and wild turkeys while doing dishes was one of her simple pleasures. Gerry was an amazing hostess to anyone that entered her home. She enjoyed fishing, gardening, and cooking. She and her husband, Bob, owned Spirit Lake Clinic Pharmacy & Spirit Lake Drug for many years where she maintained the books and did the buying for the gift store, including the Hallmark cards and ornaments. Gerry has been an avid fan of the Iowa Hawkeyes for decades and has attended many of their sporting events. She also was the number one fan for all her grandkids school activities as they grew up. Gerry was a member of PEO, LBU, bridge clubs, Arpoki, and the women's group at First Christian Church in Spencer, IA. She taught Sunday School for many years and numerous volunteer jobs in the church and at her children's school. She is survived by her husband of 62 years, Robert, "Bob," Griffiths of the family home in Okoboji, Iowa. Sisters; Virginia (Logan) Dunham, Carroll, Iowa, Ardyce (Bill) Stevenson, Spencer, Iowa, Lois (Ron) McConkey, Lewistown, Montana. Her children; Debra (Richard) Harding of Olathe, Colorado, John (Robyn) Griffiths, of Boise, Idaho, and Jeff (Patti) Griffiths, of Okoboji, Iowa. She is also survived by her grandchildren; Benjamin (Jordan) Griffiths of Seattle, Washington, Brian Griffiths, Boise, Idaho, Sharon Griffiths, Mason City, Iowa, Jennifer (Brian) Funk, Ankeny, Iowa, Melissa Harding, Fort Worth, Texas, David (Jessica) Harding, Fort Worth, Texas, Derek (Emily) True, Dallas, Texas, Ariel Campbell, Montrose, Colorado. In addition, she is survived by her great grandchildren; Joshua Campbell, Montrose, Colorado, Hunter Harding and Harper Harding, Fort Worth, Texas. Numerous nephews and nieces, their spouses and children, shared many memorable moments on Lake Okoboji with Gerry along with her "Fishing Buddies" in Canada. She is preceded in death by her parents and her brother Merle Tuschoff. The family requests in lieu of flowers, donations may be made to the Gerry Griffiths Memorial Fund at First Christian Church, 701 East 18th St. Spencer, IA 51301.

A FUNERAL SERVICE FOR 81 YEAR OLD GERRY GRIFFITHS OF OKOBOJI, WILL BE HELD AT 11:00A.M. THURSDAY, DECEMBER 18, 2014, AT THE FIRST CHRISTIAN CHURCH IN SPENCER. VISITATION WILL BE HELD WEDNESDAY, FROM 5:00P.M. UNTIL 7:00P.M. AT THE SCHUCHERT-LENTZ... View Obituary & Service Information

The family of Gerry Griffiths created this Life Tributes page to make it easy to share your memories.

A FUNERAL SERVICE FOR 81 YEAR OLD GERRY GRIFFITHS OF OKOBOJI,...

Send flowers to the Griffiths family.