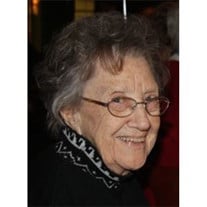 Gladys Viola (Baker) Rosenberg, age 92, of Spirit Lake, Iowa, passed away on Thursday, February 18th, 2016. She was born to the late Avalt Baker and Mabel (Bernhagen) Baker on March 11th, 1923. Growing up as a teen, during the great depression with 6 siblings, Gladys obtained her GED from Spirit Lake High School. In 1942, she then met and married Leonard Rosenberg in Spirit Lake, who was her Husband of 63 years. The happy couple bought a home on East Lake, Okoboji, now known as "Stuarts Landing". This became a loving family home to their 3 children, 6 grandchildren & 7 great-grandchildren for 56 years. There are many memories of tractors, gardening, fishing, and the home of Rosenberg Construction. Gladys was a Cub Scout leader, Brownie & Girl Scout leader, Sunday school teacher, and is a lifetime member of the Ladies Auxiliary at the Spirit Lake VFW. She worked at Berkley's (Pure Fishing) for 40 years, starting as a home worker and retiring in the spooling department. She sewed, tatted, quilted, cained & crocheted. She made amazing cinnamon rolls, rhubarb jam and bread and butter pickles. She was famous for saving everything.... even tin foil & plastic baggies. She was humble, beautiful & famous for her idioms. So many loved her for her generosity, but most importantly...for just being "Her". She will be dearly missed. Gladys is survived by her daughter, Kathi Williams, and her children, Jon (Nute) Williams, and wife, Jacinta and their two children, Ayrton & Madison Williams, Natalie Hinn and her three daughters, Callan, Sophie & Grace Hinn; her son, Eugene Rosenberg and wife, Renae, and their children, Laura Galvin, and husband, Glen, and their two children Claire & Garrett Galvin, and Paul and Kelly Rosenberg; her son, Jerry Rosenberg, and wife, Judy, and their children, Brandi Pile, and husband, Ben, and Clay Rosenberg; sisters, Ollie Kearny of Baraboo Wisconsin, Vera Speber of Adiar, OK, Evelyn Baumister of Yorba Linda, CA; and brother, F.W. (Bill) Baker and wife, Nancy of Spirit Lake, Ia. She was preceded in death by her parents; her husband, Leonard Rosenberg; and sisters, Grace Haynes and Velma Dickerson. A memorial visitation will be held Saturday, February 20, 2016, from 2:00 P.M. until 4:00 P.M. at the Schuchert-Lentz Funeral Home.

Gladys Viola (Baker) Rosenberg, age 92, of Spirit Lake, Iowa, passed away on Thursday, February 18th, 2016. She was born to the late Avalt Baker and Mabel (Bernhagen) Baker on March 11th, 1923. Growing up as a teen, during the great depression... View Obituary & Service Information

The family of Gladys Rosenberg created this Life Tributes page to make it easy to share your memories.

Send flowers to the Rosenberg family.