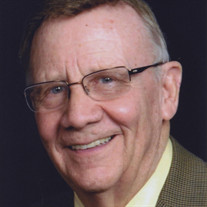 Glen Hundley, 93, of Spirit Lake formerly of Sioux Falls, SD, passed away on Sunday, November 4, 2018 at Accura Healthcare of Spirit Lake. Services for Glen will be held at 1:00 p.m. Thursday, November 8, 2018 at the Schuchert-Lentz Funeral Home in Spirit Lake. Military Funeral Honors will be performed by the American Legion Timpe Post #23 and John W. Kidd VFW Post #4514 of Spirit Lake. Burial will be in the Lakeview Gardens Cemetery in Spirit Lake. Visitation will be held one hour prior to the service on Thursday at the funeral home. Glen (Whitey) Hundley was born in Sioux Falls on March 29, 1925 to Edmund and Freda Hundley. He attended local elementary schools and graduated from Washington High School in 1943 where he excelled in track activities. Upon his graduation, he joined the United States Navy and served in the South Pacific during World War II where he participated in the Saipan, Palau, and Okinawa campaigns. In 1950 he graduated from the University of South Dakota. That same year he married Arlene Leaders on September l, at First Lutheran Church. In June of 1951 he was recalled to active duty for the Korean War and served 18 months in Japan. After his discharge, he was employed for several years by the South Dakota State Employment Office where he served as supervisor, and joined the Sioux Falls School system in the Fall of 1956. He taught physical education at Bancroft, Horace Mann, and Riverside from 1956 - 1961. In 1960 he received his Master’s Degree from South Dakota State University. He was a Counselor at Whittier Jr. High School until 1972. He then moved to the Southeast Area Vocational Technical School where he was a Counselor and Financial Aids Officer until his retirement in 1986. He was a member of First Lutheran Church in Sioux Falls, American Legion, Veterans of Foreign Wars, Masonic Unity Lodge #130, El Riad Shrine, Elks, National Education Association, and the South Dakota Education Association. In 2018 Glen moved to Spirit Lake, IA to be near family and became a member of First Presbyterian Church. Glen was devoted to his family. He and his wife loved camping with the family when the children were younger, and later enjoyed the summers at Lake Madison with family and friends. His grandchildren were a source of tremendous joy and he spent many hours catering to their every need. After retirement, Glen and Arlene enjoyed the winter months in Arizona where they were active in their retirement park. They always looked forward to visits from their children and grandchildren. After Arlene’s death, Glen moved in with his daughter and son-in-law, and spent time with his children, grandchildren, and great grandchildren. He treasured the time spent at their place on Lake Okoboji in Iowa. Glen was preceded in death by his wife, Arlene in 2005. Glen is survived by one daughter, Nancy (Brett) Thacker of Sioux Falls and Spirit Lake, one son, Robert, Sioux Falls, SD and two granddaughters, Amanda (Andy) Shaffer, Spirit Lake, IA and Elizabeth (Chase) Schomburg, Princeton, MN, one step grandson, Albert Thacker, of Milford, IA, and one step granddaughter, Haley (David) Barber, Milford, IA, and four great grandchildren; Rebekah, Jesse, and Augustine Glen Schomburg, and Jaxon Barber. He was preceded in death by his parents, one brother Floyd, and his sister Marlene Jacobson. Memorials may be directed to First Presbyterian Church, 3501 Hill Ave, Spirit Lake Iowa, 51360, or to the El Riad Shrine, PO Box 1203, Sioux Falls, SD 57101-1203, in memory of Glen Hundley to be designated for the Shriners Hospitals for Children.

Glen Hundley, 93, of Spirit Lake formerly of Sioux Falls, SD, passed away on Sunday, November 4, 2018 at Accura Healthcare of Spirit Lake. Services for Glen will be held at 1:00 p.m. Thursday, November 8, 2018 at the Schuchert-Lentz Funeral... View Obituary & Service Information

The family of Glen Hundley created this Life Tributes page to make it easy to share your memories.

Send flowers to the Hundley family.