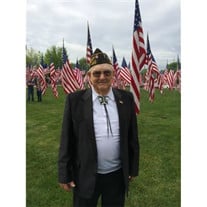 Grover C. "Bud" Newton Bud passed away peacefully at home in Okoboji Nov. 16 at age 92. Bud was born in Emmet County about six miles southwest of Wallingford, IA to Grover and Nellie Kathryn Culbertson Newton on Sept. 28, 1922. Bud is survived by his wife of 70 years Mary McBreen Newton and children Mike (Kathy), Kate Dickson (David), John (Darla), and JoAnne McCullough (Ben); eight grandchildren and four great grandchildren; and a sister Darlene Siefken (Jim). He was preceded in death by his parents, a daughter Kelly, one brother and five sisters. Bud started school in Wallingford and when the family moved to a farm northwest of Superior in 1932, he attended North Superior School, graduating in 1940. He worked for neighbors until he joined the US Navy in Sept. 1942. Bud left for the Navy on his 20th birthday where he reported to boot camp and Aviation Ordnance Service School at Great Lakes, IL. He left Norfolk, VA in July 1943 for Brazil where he joined Navy Squadron V.B.127 as a combat air crewman on a Navy PV1 medium bomber. He and his fellow crew flew across the Atlantic Ocean the first week of September 1943 to a new base in Port Lyautey in French Morocco. They flew anti-sub patrol and convoy coverage over the Bay of Biscayne, the straits and mouth of the Mediterranean, and down the coast to the Canary Islands on a daily basis. Bud returned to the U.S. as a 2nd class Petty Officer on Labor Day 1944. That evening he went to Arnolds Park and the Roof Garden where he was reacquainted with a friend, Mary McBreen, who had just graduated from nursing college as a registered nurse. The friendship kindled and they were married Dec. 28, 1944, at Northfield, MN by Father James O'Hara at St. Dominic's Church. Bud was a student at St Olaf College in pre-flight school, continuing on to the University of Georgia. He was discharged from the Navy in Nov. 1945. He started farming in 1945 and continued until 1957 when the family moved to Tucson, AZ. He worked as a clerk in the US Post Office, returned to Iowa in 1961 and farmed for six years. In 1966 he built a new home on Big Spirit Lake. In 1967 he joined the firm of VanDyke Carlson selling real estate. One year later, he and Al Frahm and Garret Van Dyke formed the firm Van Dyke Frahm & Newton Inc. Bud retired in 1980. During the years as a realtor, he served in the capacity as president of Lakes Multiple Listing Service, president of Iowa Great Lakes Board of Realtors, president of Spirit Lake Rotary Club and Commander of VFW Post 4514 of Spirit Lake. He was a life member of the VFW and the American Legion and was a member of the Dickinson County Draft Board. Bud and Mary started RV'ing in the mid 70's, traveling to many parts of the U.S. They settled later on wintering in Tucson, AZ and spending summers in Okoboji. Bud was an avid golfer. He enjoyed managing a foot long hot dog stand at the Clay County Fair for over 20 years. While in Tucson, he volunteered as a marshall for the Tucson Open golf tournament for many years, as well as working for the city during spring baseball training. Of all the things Bud enjoyed most were the times with his family and friends from Tucson and Okoboji. A funeral Mass will be held at 10:30A.M. Wednesday, November 19, 2014, at St. Mary's Catholic Church in Spirit Lake. Visitation will be held Tuesday, from 4:00P.M. until 6:00P.M. at the Schuchert-Lentz Funeral Home. Burial will be at St. Margaret's Cemetery.

The family of Grover "Bud" Newton created this Life Tributes page to make it easy to share your memories.

Send flowers to the Newton family.