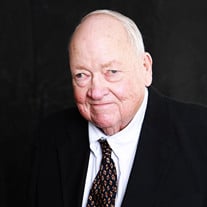 Harley A. Whitfield, 86, passed away on January 9, 2017, at Sarasota Memorial Hospital in Sarasota, Florida. Harley was a resident of Des Moines, Iowa up until retiring and moving permanently to Spirit Lake, Iowa. Harley was born October 7, 1930, to Allen and Irma Cowan Whitfield. He graduated from Roosevelt High School in Des Moines in 1947. He attended Iowa State University, earning a Bachelor of Science Degree in 1951, and was a member of Kappa Sigma Fraternity. After graduation he married his high school sweetheart, Syrena Kinneman, in Des Moines in 1951. Following his military service as a lieutenant in the Air Force for two years, Harley attended Drake University Law School, graduating with honors in 1956 and earning membership in the Order of the Coif, and was a member of Omicron Delta Kappa National Leadership Honor Society. While in his last year of law school, he served as Executive Vice President of the nationwide American Law Student Association sponsored by the American Bar Association. Harley was a practicing attorney for more than 40 years, specializing in business and corporate law. He spent his entire legal career with the Des Moines law firm of Whitfield and Eddy, practicing from 1956 until his retirement in 1995. Harley was a member of the Polk County Bar Association, Iowa State Bar Association and the American Bar Association. He was admitted to practice law in the State of Iowa and the District of Columbia. While in Des Moines, he was President of the Des Moines Jaycees and was on the Model Cities Board. He served as a member and Chairman of the Board of Directors of Morningside College in Sioux City, Iowa, on the Board of Directors of the Iowa State Memorial Union, and on the Board of Directors of American Equity Investment Life Holding Company. Lake Okoboji was a special part of Harley’s life - visiting the lake for the first time as a boy, spending summers there after his parents purchased their cottage in Haywards Bay, honeymooning there with Syrena and buying a house in Egralharve Bay for his own young family to enjoy, and eventually retiring there. Like his time in Des Moines, he was active in Okoboji serving as past Commodore of the Okoboji Yacht Club, serving on the Board of Directors of the Okoboji Yacht Club Sailing School, Inc, and serving on the Board of Directors of the Okoboji Protective Association. He was an active racing sailor on Lake Okoboji for many years as well. In their retirement years, Harley and Syrena continued their love of life on the water, enjoying several winters in Longboat Key, Florida. Harley is survived by his four children: Melanie (Dr. Steven) Carlson of Spirit Lake, Iowa; Robert Whitfield of Urbandale, Iowa; Harley Whitfield, Jr. of West Des Moines, Iowa; and Ann (Dan) Frink of Spencer, Iowa. Harley is also survived by 11 grandchildren and 8 great-grandchildren. Funeral services will be held at 11:00 A.M. on Saturday, January 14, 2017, at the United Methodist Church in Spirit Lake. Visitation will be held from 4:00-6:00 P.M., on Friday, January 13, 2017, at the Schuchert-Lenzt Funeral Home in Spirit Lake. Burial will be at Lake View Gardens Cemetery in Spirit Lake. The family suggests that memorials may be made to the Okoboji Yacht Club Sailing School, Inc. P.O. Box 544, Milford, IA 51351.

Harley A. Whitfield, 86, passed away on January 9, 2017, at Sarasota Memorial Hospital in Sarasota, Florida. Harley was a resident of Des Moines, Iowa up until retiring and moving permanently to Spirit Lake, Iowa. Harley was born October 7,... View Obituary & Service Information

The family of Harley A. Whitfield created this Life Tributes page to make it easy to share your memories.

Send flowers to the Whitfield family.