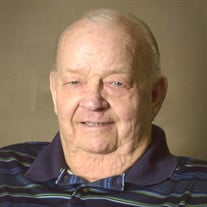 Funeral services for 87 year old Harold “Butch” Momsen of Spirit Lake and formerly of Everly will be 10:30 AM Monday at Grace Lutheran Church in Spirit Lake, with Rev. Martin Lucin officiating. Burial will be in St. Margaret’s Cemetery. Visitation will be 4:00 – 7:00 pm Sunday, with a time for sharing at 6:30 pm at the Schuchert-Lentz Funeral Home in Spirit Lake. Harold “Butch” Momsen passed away peacefully in his sleep on March 8, 2017 at Hawkeye Care Center in Spirit Lake, IA. Harold had resided at Hawkeye since shortly after his wife’s death in August of 2015, in order to be closer to his daughter Laurie. Harold was born May 25, 1929 in Everly, IA to Lorenz and Auguste Momsen, the youngest of 4 children. Harold lost his father at age 11 after which he and his brothers Ed and Karl ran a rendering business in Everly to support the family. After serving 2 years in the Army in Korea, Harold attended the University of South Dakota on the GI Bill and married Evelyn Duling of Sioux City, IA in 1954 before completing his degree at USD. Harold and Evelyn were blessed with four children. Harold worked in Spencer, IA for his brother Karl at Momsen Trucking before moving to Sioux Falls, SD in 1963 to take a sales position with the Vernon Company, (Newton, IA). Harold enjoyed his customers and worked hard to earn their business. After 49 ½ very successful years in sales and sales management, Harold finally retired at the age of 83. Harold’s joys were time spent with his wife, children, extended family and friends. He enjoyed relaxing at Lake Okoboji, playing golf, hunting, and playing cards. In his later years, Harold’s brightest smiles came from visits and chats with his grandchildren and his great grandchildren. Harold is survived by his brother Karl Momsen of Omaha, NE, his four children Laurie (Jim) Murray, Milford, IA, Amy Momsen (Gary Winter) and Tom Momsen (Kate Fitterer) Minneapolis, MN; and Mark (Kay) Momsen, Rochester, MN; grandchildren Charlie (Gina) Murray, children Edward and Molly, Rita (Ben) Rice, son Leo, Jake (Allie) Murray, Adam (Nina) Momsen and Kate Momsen. Harold was preceded in death by his wife, his brother Ed, and his sister Helen Anderson. Memorials may be sent to Lutheran Services in Iowa, 12 E. 5th Street, Spencer, IA 51301.

Funeral services for 87 year old Harold &#8220;Butch&#8221; Momsen of Spirit Lake and formerly of Everly will be 10:30 AM Monday at Grace Lutheran Church in Spirit Lake, with Rev. Martin Lucin officiating. Burial will be in St. Margaret&#8217;s... View Obituary & Service Information

The family of Harold "Butch" Momsen created this Life Tributes page to make it easy to share your memories.

Send flowers to the Momsen family.