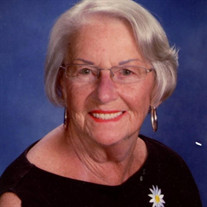 Hazel V. Read, 89, of Okoboji passed away on Thursday, August 5, 2021, at Lakes Regional Healthcare in Spirit Lake. A memorial service will be held on Wednesday August 11, 2021, at 10:30 a.m. at the Spirit Lake United Methodist Church. Visitation will be held one hour prior to the service on Wednesday at the church. A private family burial will be held in the Harris Union Cemetery in Harris, IA. Hazel Virginia (Wills) Read was born on December 14, 1931, in Ridge Farm, Illinois to Harry and Clara (McCool) Wills. She graduated from Harris High School in 1949. She was united in marriage to Ray Akkerman on February 12, 1950, in Harris, IA. To this union 2 daughters were born, Linda and Connie. Hazel was later united in marriage to Chalmer Read on July 21, 2000, in Spirit Lake, IA. He preceded her in death on August 22, 2007, in Milford, IA. Hazel worked as a farm wife, Secretary for the Berkley Fishing Company and retired as a Credit Manager when she resided in Las Vegas. She was very proud to earn the award as Credit Manager of the Year. She was a member of United Methodist Church in Spirit Lake where she was a member of the UMW and active with various church circles. In her free time, she loved to tend to her flower garden, read, bowling and golf. Left to cherish her memory are her daughters Linda (Gary) Kleve of Ocheyedan, IA; and Connie (Dan) Stahly of Lake Park, IA; five grandchildren, Mindy (Terry) Eggers, Chad Kleve, Jeremy (Bobbi Jo) Kleve, Missy (Shon) Gembler, and Melanie (Jason) VanGelder; eleven great grandchildren and one great-great grandson. She was preceded in death by her parents, husband, three brothers and one sister.

Hazel V. Read, 89, of Okoboji passed away on Thursday, August 5, 2021, at Lakes Regional Healthcare in Spirit Lake. A memorial service will be held on Wednesday August 11, 2021, at 10:30 a.m. at the Spirit Lake United Methodist Church. Visitation... View Obituary & Service Information

The family of Hazel Virginia Read created this Life Tributes page to make it easy to share your memories.

Hazel V. Read, 89, of Okoboji passed away on Thursday, August...

Send flowers to the Read family.