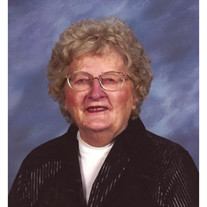 Helen E. Loos, age 94, of Spirit Lake, passed away Monday, September 8, 2014, at Hospice of North Iowa in Mason City. She was born on January 23, 1920, in Spirit Lake, to Frank and Mary Happe. Helen graduated from Spirit Lake High School in 1938. She was united in marriage to William Loos in January of 1946, in Great Falls, Montana. William passed away in September of 2003. Helen earned her Bachelor of Arts Degree from Mankato State College and taught for several years. Helen and Bill moved to the Happe farm in the fall of 1954, where they raised four children and farmed until their retirement. Helen enjoyed gambling, playing cards and traveling. Highlights of her travels included trips to Switzerland, Mexico and Alaska. Helen is survived by two daughters, Mary Kay Jensen of Northwood, Iowa, and Colleen Sober, and her husband, Greg of Prescott, Arizona; two sons, Martin Loos of Spirit Lake, Iowa, and Gary Loos, and his wife, Karen of Clear Lake, Iowa; 10 grandchildren; and 15 great-grandchildren. She was preceded in death by her parents; her husband; a son-in-law, Richard Jensen; two brothers; and four sisters. A funeral Mass will be held at 10:30A.M. Thursday, September 11, 2014, at St. Mary's Catholic Church in Spirit Lake. There will be one hour of visitation prior to the Mass at the church. Burial will be at St. Margaret's Cemetery. In lieu of flowers, memorials may be given to Hospice of North Iowa in Mason City. The Schuchert-Lentz Funeral Home is in charge of the arrangements.

The family of Helen Loos created this Life Tributes page to make it easy to share your memories.

Send flowers to the Loos family.