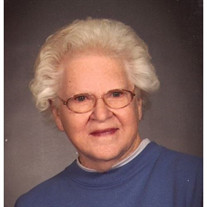 Helen Lynn, age 93, of Lincoln, Nebraska formerly of Spirit Lake, Iowa journeyed to her heavenly home on Wednesday January 14, 2015. She was surrounded by her loving family as she left this earth. Helen was born on November 22, 1921 in Silver Lake Township in Iowa to Fred and Etta Mae Hale. The youngest of 8 children, she graduated from Lake Park High School in 1939. She enlisted in the U.S. Navy in 1942, and served as a Navy nurse until the end of the war. On December 15, 1946, she was united in marriage to Bernard F. (Barney) Lynn in Sioux City, Iowa. They settled in the Spirit Lake area, where they farmed and raised their three children. Helen worked in the hospital in Spirit Lake as a nurse's aide for many years following their marriage. She was later employed by McQuays Manufacturing until her retirement. After Bernard passed away in 1999, Helen moved to Nebraska to be closer to her children and grandchildren. She lived with her daughter in Ceresco, Nebraska, and later they moved in to Lincoln. Helen enjoyed reading, crossword puzzles, playing cards, especially a good game of cribbage. She also enjoyed watching her grandkids and great grandkids in their school and sports activities. One of her greatest joys was being around and helping her family. She was family first, last and always. Helen was preceded in death by her beloved husband Bernard, her parents, and her six brothers and one sister. Left to cherish her memory are her three children, Jerry (Donna) of Mead, Nebraska, Carolyn, of Lincoln Nebraska and Keith (Cheryl) of Lincoln, Nebraska; five grandsons, Phillip and significant other Kailey, Ryan and fiancé Barbie, Brett, Brian and wife Chariese, and Chris and significant other Brittnie; and seven great grandchildren, Alexis, Delanee, Ryan, Rowan, Camden, Jackson and Mattix. She will also be missed by many relatives and friends in Iowa and Nebraska. Funeral services will be held at Schuchert-Lentz Funeral Home in Spirit Lake, Iowa on Monday, January 19,2015 at 2 pm with public viewing from noon until time of services on Monday. Burial will be in Memorial Gardens Cemetery in Spirit Lake. Military rites will be handled by the Spirit Lake American Legion and V.F.W. A memorial service will also be held on Thursday, January 22, 2015, at 7:00 P.M. at the Evangelical Covenant Church in Ceresco, Nebraska, for Helens friends in Nebraska.

Helen Lynn, age 93, of Lincoln, Nebraska formerly of Spirit Lake, Iowa journeyed to her heavenly home on Wednesday January 14, 2015. She was surrounded by her loving family as she left this earth. Helen was born on November 22, 1921 in Silver... View Obituary & Service Information

The family of Helen Lynn created this Life Tributes page to make it easy to share your memories.

Send flowers to the Lynn family.