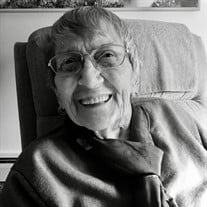 Helen Marie Nash Sturgeon, age 93, passed away December 21, 2020 at Milford IA.Helen was born September 7, 1927 in Cherokee IA, to Francis (Frank) Louis Nash and Adela Marie (Rovn)Nash. She graduated in 1945 from Cherokee Wilson High School. She was employed for two years by Western Union in Cleveland OH and Chicago IL before returning to Cherokee to marry Dale Lewis Sturgeon of Aurelia, IA at Memorial Presbyterian Church on June 7, 1946. To this union was born four children—Sherry, Susan, Michael, and Connie.Dale and Helen co-owned and -operated Cherokee Bowl on the east side of Cherokee from 1956 until the flood of 1965 when they built a 16-lane bowling house and lounge in south Cherokee—Cherokee Bowl and Coachman Lounge. They sold the business in 1977 to retire and then lived for five winters in the Florida Keys, and eight winters in Rio Grande Valley TX before settling permanently in 1990 in their home in Arnolds Park IA on Emerald Hills Golf Course.In Cherokee, Helen was a member of Eastern Star, Tone Circle, and was an original member of the Cherokee Symphony as a violinist. She was a competitive bowler and enjoyed traveling to tournaments with her team. Helen enjoyed the many summers the Sturgeon family spent boating and water-skiing together at their East Lake Okoboji cottage.In the Lakes Region, Helen was a member of the Eastern Star and Past Matrons Club; the Arpoki Women’s Club; the Spirit Lake Quilters; and bridge and book clubs. She was a lifelong accomplished seamstress and for fourteen years served as sewing chairwoman on the board of the Hospital Auxiliary while managing the hospital Teddy Bear project and the volunteers who hand-crafted teddy-bears for patients seen at the hospital ER and at same-day surgery. Helen’s creative talents were best applied to her love of hand-crafting pieced quilts, and during her retirement years she designed and created a minimum of 100 quilts for family members, hospice and Veteran’s Hospital patients, and for children attending the YMCA Camp Foster summer Burn Survival Camp. She also enjoyed technology, was an avid reader, and she and Dale attended Okoboji Summer Theatre where they held season tickets since 1990. Helen was a member of the Calvary United Methodist Church in Arnolds Park.As her high school yearbook noted, “Helen is happy and lots of fun; she’s a friend to everyone.” Her vibrant spirit will be greatly missed by her family and friends. She is survived by three daughters, Sherry Clark, Rocky Comfort MO; Susan Williams, Fort Collins CO, Connie Holmer, Fort Collins CO, and son, Michael, Lakewood CO. Also a brother-in-law, Bill Pigott of Cherokee IA; and brother Frank Nash Jr, LaGrange Park IL. Also surviving are 7 grandchildren, 14 great grandchildren, one great-great-grandchild and many greatly loved nieces and nephews. She was preceded in death by her husband, Dale; her parents; her sister, June Pigott, and three brothers-in-law, Roger, Darrel, and Arlo Sturgeon. Services will be held at a future date.

The family of Helen Marie Sturgeon created this Life Tributes page to make it easy to share your memories.

Send flowers to the Sturgeon family.