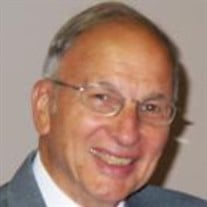 Henry “Jack” Holzhauer, 88, died Thursday April 2, 2020, at Lakes Regional Healthcare in Spirit Lake, IA. Born on April 2, 1932 in Newark, NJ, he was the son of Henry John Holzhauer and Ethel Rae (Jarman) Holzhauer. He attended the University of Vermont and completed his Business degree at Rider University in Trenton, NJ. On June 19, 1954 he married Elizabeth (Betsey) Flint in Westfield, NJ. In December 1954, he was drafted into the Army in the Medical Corp, serving as a Medical Laboratory Director. He was discharged in 1956. He and Betsey moved to Willingboro, NJ when he became Plant Manager at Wall Rope Company. While they were living there, they had four children, David, Patty, Anne and Katie. In 1974, they moved to Spirit Lake, IA where he worked in R&D for Berkley & Co. Jack was known for being able to fix anything and could pack a station wagon like nobody’s business. In 1983, he started his own business, Megabytes, which provided computer services and support for businesses and individuals throughout the Lakes Region. Although he retired from the business at 85, he was still getting phone calls for service on the day he died! On the day Betsey retired in 2003, they purchased a Scamp camper, affectionately known as the Looney Bin, and off they went! Over the next 12 years they traveled over 100,000 miles, visiting over 300 campgrounds across the United States and Canada. Their favorite trips included the western National Parks, especially the Grand Canyon, the Grand Tetons, and the Canadian Rockies. When all was said and done, they had visited all but five of the lower 48 states. Jack belonged to Spirit Lake Kiwanis where he served as president, and Iowa Great Lakes Rotary where he was Secretary/Treasurer for many years. He was also Treasurer for Dickinson County Taxpayers Association, and served on the Board of Spirit Lake Protective Association. Jack was an avid participant in many choral groups including barbershop groups in New Jersey and Iowa, Many Voices Choir and several local church choirs. He was very active at St. Alban’s Episcopal Church where he was Warden for many years, as well as head of the Search Committees and the Building Committee. Jack also served the Episcopal Diocese of Iowa, as a member of several different committees and commissions over the years. Jack was preceded in death by his infant son, David; his infant grandson, Matthew; and his brothers-in-law, William Smith and Al Scherr. He is survived by Betsey, his wife of 65 years and best friend for a lifetime; daughters Pat Moore, Anne Strayer and Katie (Dan) McClurg; five grandchildren, five great-grandchildren and 11 nieces and nephews; his sister, Virginia Scherr; his sister-in-law, Tobie Smith; and brother-in-law, John (Carolyn) Flint. Interment and a Celebration of Life will be held at a later date. Schuchert-Lentz Funeral Home is in charge of arrangements. Memorial contributions may be made to St. Alban’s Scholarship Fund.

The family of Henry "Jack" Holzhauer created this Life Tributes page to make it easy to share your memories.

Send flowers to the Holzhauer family.