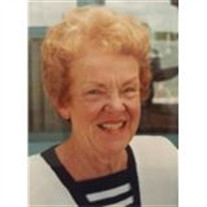 Isabel Julia Leighton, age 90, of Okoboji, passed away Friday, September 25, 2015 at the Hawkeye Nursing Center in Milford, Iowa. She was born April 30, 1925, on a farm in Galva, Iowa, to Roy and Genevieve (Crotty) Murray. Isabel graduated from Storm Lake High School in 1943. After completing her first year of college at Saint Mary-of-the-Woods College in Indiana, Isabel transferred and obtained her Bachelor of Science degree in Home Economics from the University of Wisconsin, Madison in 1947. Isabel was united in marriage to Lew Leighton in 1950 in Fort Dodge, where they lived for a couple years before Lew's career with United States Gypsum took the family to Staten Island New York area for two years, and thereafter to the Chicago area for seven years before returning to Fort Dodge in 1965. Upon returning to Fort Dodge, Isabel worked as an interior decorator for the Collins-Beier paint store until 1972 when she and Lew opened and operated Isabel's Interiors decorating business on Central Avenue until retiring to Okoboji, Iowa in 1988. She also wrote a column for the Fort Dodge Messenger called "Izz Says," and regularly made appearances on the local Fort Dodge radio and TV stations to discuss and provide decorating hints and advice. Isabel and her two sisters developed roots in the Okoboji area starting in 1950 when her parents bought a lake cottage on Pocahontas Point on West Lake Okoboji. For almost four decades, the cottage was a treasured vacation and gathering spot for their three families. Isabel always remained engaged in her church and communities in Western Springs, Illinois, Fort Dodge and the Okoboji area. She was a regular volunteer for the Pearson Lakes Art Center, and greatly enjoyed the Okoboji Yacht Club, playing bridge, joining gatherings of the "Swingers," and entertaining the close-knit group of friends she and Lew maintained throughout their 58 years of marriage. Starting in 1993, Isabel and Lew developed great friends and support from the outstanding community they helped create at the Chalstrom Beach Plantation condominiums on East Okoboji. Isabel is survived by her two sons, Michael Leighton of Bloomington, Minnesota, and Richard (Elizabeth) Leighton, of Eden Prairie, Minnesota and five grandchildren, Benjamin, Olivia, Matthew, Peter, and Meaghan. She was preceded in death by her parents; husband, Lew, and her two sisters, Jean (Duke) Schatz from Omaha and Barbara (Don) Henningsen from Atlantic. A funeral Mass will be held at 10:30 A.M. on Friday, October 2, 2015, at St. Joseph's Catholic Church in Milford, Iowa. Visitation will be held one hour prior to the service at the church. A reception with food and refreshments will follow at the church refectory, after which the family will travel for a graveside burial service to be held at the Corpus Christi Cemetery in Fort Dodge at 3:00pm that same afternoon. In lieu of flowers, memorials may be given to the Pearson Lakes Art Center in Okoboji.

Isabel Julia Leighton, age 90, of Okoboji, passed away Friday, September 25, 2015 at the Hawkeye Nursing Center in Milford, Iowa. She was born April 30, 1925, on a farm in Galva, Iowa, to Roy and Genevieve (Crotty) Murray. Isabel graduated... View Obituary & Service Information

The family of Isabel J. Leighton created this Life Tributes page to make it easy to share your memories.

Send flowers to the Leighton family.