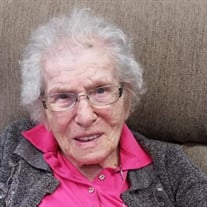 Iva Mae (Ivie or Miss Ivie) Gruver of Spirit Lake, formerly of Cherokee and Okoboji passed away on March 10, 2021, at Community Memorial Health Center in Hartley. There will be a private family graveside service in the Rudd Evergreen Cemetery in Rudd, IA. Iva was born July 8, 1925 to Lewis and Bertha (Handt) Blunt at Rudd, IA where she grew up and graduated from the Rudd Consolidated High School in May of 1943. She worked at the Rudd Café, Rockford and Hemp Plant and Office at Oliver Cooperation, Charles City. On December 1, 1944, she married Norman Helmers. One daughter, Judith Ann was born to this union. The marriage ended in divorce. On February 4, 1956 she married Cecil Gruver. Cecil passed away February 1985. They both worked at Cherokee Mental Health for 35 years. Iva started Iva’s Café in Rudd in 1947 and sold it in 1952. She then moved to Cherokee where she worked as a Mental Health Worker Supervisor of the children’s adolescent unit for 35 years retiring in April of 1988. After retirement, she moved to her home at the Smith’s Mobile Court in April of 1988 where they had spent days off and vacationed. They loved to go fishing in the lakes area. She lived there till March of 2006 when she moved to the Sunrise Senior Housing in Spirit Lake. She volunteered at the Lakes Regional Hospital where she had over 12,000 volunteer hours. During this time, she was President of the Auxiliary, Auxiliary Advisor to the Hospital Board of Trustees, member, and volunteer Senior Action Committee. She had also been an Advocate on the Northwest Iowa Ageing in Spencer, Northwest Iowa, and Minnesota. She was a member of the Calvary United Methodist Church. She was always willing to cover where she could and always found time, even if she had to change her plans to help anyone out. She was continually active and spent time at the Athletic Club almost every day. She loved to golf, play cards, bingo, trying her luck at casinos. She was also on the board of the Golden Adventure and had proudly traveled to every state. She was a Cubs fan as well as the Iowa Hawkeyes. Iva loved to laugh and talk; she never knew a stranger. She had friends all over the country. She always thought positive and would always say “there is always a little good in everyone”. She was very proud of her daughter and family and treasured the vacations with her family throughout the years in their 5th wheel. She is survived by her daughter Judith Ann (Larry) Oeltjenbruns of Hollister, MO; grandson Chris (Michelle) Oeltjenbruns and children Parker, Devin and Jayden; granddaughter Clarinda (Tony) and children Kaleb, and Kenya Brown; sister Betty Neel of Manly, IA; numerous nieces, nephews, and friends. She was preceded in death by her parents, husband, brothers Orvie, Paul and Clair and sister Viola. Iva would like to leave you with this last message, “My passing should be a happy time, as life goes on!”

Iva Mae (Ivie or Miss Ivie) Gruver of Spirit Lake, formerly of Cherokee and Okoboji passed away on March 10, 2021, at Community Memorial Health Center in Hartley. There will be a private family graveside service in the Rudd Evergreen Cemetery... View Obituary & Service Information

The family of Iva Mae Gruver created this Life Tributes page to make it easy to share your memories.

Send flowers to the Gruver family.