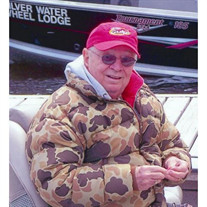 Jack H. Bedell, age 92, of Spirit Lake, passed away on Wednesday, March 23, 2016, at Lakes Regional Healthcare in Spirit Lake. He was born on December 19, 1923, in Spirit Lake, to Walter and Virginia (Price) Bedell. Jack was united in marriage to Marcia Dowden on May 29, 1943, in Minneapolis, Minnesota. They were married 72 years, before Marcia passed away on November 6, 2015. Jack graduated from Spirit Lake High School and enlisted to serve his country in the United States Air Corps. He served overseas as a pilot, where he flew the Hump from India to Burma to China during World War II. When he returned to the United States, he graduated from the University of Iowa Law School in 1950, and moved back to Spirit Lake to practice law with his parents. During his career, he served as Dickinson County Attorney for 14 years, was appointed to the Iowa Board of Parole for 12 years and practiced private law until he retired in 1989. Jack was a member of Kiwanis, where he served as president, the American Legion, the V.F.W., County Chairman of the American Cancer Society, secretary of the Dickinson County Republican Central Committee, Chairman of the Board of the Spirit Lake United Methodist Church, where he taught adult Sunday School and did some lay preaching at Superior, Ledyard and Burt and was Pack Chairman of the Cub Scouts. He enjoyed spending his spare time golfing, hunting, fishing, watching all sports, especially his great-grandsons, having coffee with his friends and talking politics. Jack is survived by two children, Deenie Schuchert, and her husband, Jim of Spirit Lake, and Dr. Dick Bedell, and his wife, Kaki of Midlothian, Virginia; a daughter-in-law, Kristi Stahl and her husband Dan of Davenport; brother, Berkley Bedell, and his wife, Elinor of Naples, Florida; seven grandchildren, Chad (Jennifer) Schuchert, Wade (Joslyn) Bedell, Courtenay Bedell, Allison (Steve) Zabel, Clay Bedell, Aaron Bedell and Kara (Mike) Greer; and eleven great-grandchildren, Lexi, Grant, Payton, Taylor, Carson, Brock, Ridgley, Sydney, Lauren and David. He was preceded in death by his parents; his wife, Marcia; son, Dr. David Bedell; grandson, Todd Schuchert. A funeral service will be held at 10:30 A.M. Tuesday, March 29, 2016, at the United Methodist Church in Spirit Lake. Visitation will be held Monday, from 4:00 P.M. until 7:00 P.M. at the Schuchert-Lentz Funeral Home. Burial will be at Memory Gardens Cemetery. In lieu of flowers, memorials may be given in Jack's name to the Spirit Lake School Foundation, 2701 Hill Ave., Spirit Lake, Iowa, 51360 or JDRF, Taylor Zabel Tribe, Central Virginia Chapter, 1801 Libbie Avenue., #106, Richmond, VA, 23226.

Jack H. Bedell, age 92, of Spirit Lake, passed away on Wednesday, March 23, 2016, at Lakes Regional Healthcare in Spirit Lake. He was born on December 19, 1923, in Spirit Lake, to Walter and Virginia (Price) Bedell. Jack was united in marriage... View Obituary & Service Information

The family of Jack Bedell created this Life Tributes page to make it easy to share your memories.

Send flowers to the Bedell family.