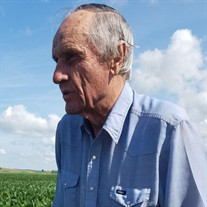 Jack Doren Tatman, 95, of Spirit Lake passed away on Wednesday, December 11, 2019 at Accura Healthcare of Spirit Lake. Funeral services for Jack will be held at 11:00 a.m. Saturday, December 14, 2019 at the Schuchert-Lentz Funeral Home in Spirit Lake. Military funeral rites will be conducted by the American Legion Timpe Post #23 and John W. Kidd VFW Post #4514 of Spirit Lake. Burial will be in the Union State Line Cemetery in Rural Superior. Visitation will be on Friday from 4-6 p.m. at the funeral home. Jack was born in Center Grove Township, Dickinson County, Iowa, on January 19, 1924 to Majorie Viola (Liddle) and Charles Thomas Tatman. He attended schools at Arnolds Park, Milford, Richland Township #3 (a country school) and graduated from Superior High School, Superior, Iowa. He attended Estherville Junior College and City College of New York (during military service). On September 3, 1944, Jack and Irene Mae Brunsvold were married in Ames, Iowa. Jack is survived by two daughters, Marlene (John) Wexler of Brooklyn Park, MN, and Connie Fontenot of Okoboji, IA; one son, Doren (Julie) Tatman of Spirit Lake, IA; one brother , Richard Tatman of Whapeton, IA; five grandchildren and eight great grandchildren. He was preceded in death his wife Irene, his parents, sister Patsy Leininger, and granddaughter and a great grandson. Jack was drafted into military service on March 13, 1943 and released from service on April 19, 1946. He served with the 82nd Airborne Divisions in Europe. Upon returning home from military service, Jack farmed in Superior Township. Jack served on the North Superior Consolidated School District Board as president from 1952 to 1958, when he was elected to the Spirit Lake School District Board, on which he served as president until Iowa Lakes Community College was organized in 1967. Jack served as its first president and continued serving on the board for 42 years, 21 as board president. In 1997, he received the John P. Kibbie award for outstanding trustee from the Iowa Association of Community Colleges. Memorials may be directed to the Union State Line Church at 72014 Petersburg Rd., Jackson, MN 56143.

Jack Doren Tatman, 95, of Spirit Lake passed away on Wednesday, December 11, 2019 at Accura Healthcare of Spirit Lake. Funeral services for Jack will be held at 11:00 a.m. Saturday, December 14, 2019 at the Schuchert-Lentz Funeral Home in Spirit... View Obituary & Service Information

The family of Jack Doren Tatman created this Life Tributes page to make it easy to share your memories.

Jack Doren Tatman, 95, of Spirit Lake passed away on Wednesday,...

Send flowers to the Tatman family.