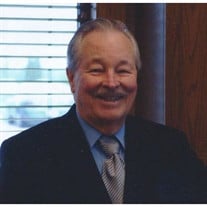 James W. Cravens, age 95, of Wahpeton, passed away on Saturday, October 17, 2015, at his home in Wahpeton. He was born on January 15, 1920, in Sanborn, Iowa, to John and Dorothy (Daly) Cravens. Jim was united in marriage to Margaret Cary on May 24, 1940. Margaret passed away on March 15, 2013. Jim graduated from Sanborn High School in May of 1938. He attended the University of Iowa, and received a degree from the Graduate School of Banking at the University of Wisconsin. His banking career started September 1, 1944, with the Sanborn Savings Bank. In 1973, he became associated with the Dickinson County Savings Bank, now United Community Bank. He was active in both institutions until his retirement in January of 2015. Jim made community service an important part of his life. He was active in many organizations in northwest Iowa and in the state serving on the State Banking Board, The Iowa Association of Municipal Utilities, Camp Foster YMCA, Okoboji Yacht Club, the Dickinson County Hospital and many more. He enjoyed spending his spare time fishing, hunting, golfing, sailing and socializing with his friends and family. Jim is survived by his two children, Margaret "Mitzi" Porter, and her husband, Glenn, and James P. Cravens, and his wife, Marilyn; grandchildren, Phillip Porter, Kim Porter Hornibrook (John), Roxann Porter Hackbarth (Dave), Emilie Cravens (Jesse Tack) and Catherine Cravens; great-grandchildren, Hunter Porter, Megan Hackbarth, Alex Hackbarth Hawn (Nate), Glenn Hackbarth, Cole Hackbarth, Taylor Hackbarth, Sopie Hackbarth and Johnna Hornibrook; great-great-grandchildren, Justine Hackbarth, Kiernan Hawn and Ezra Hawn; and nieces and nephews. He was preceded in death by his parents; son, John H. Cravens on May 25, 1988; wife, Margaret; and sister, Jeanne Friberg. A memorial service will be held at 1:00 p.m. Wednesday, October 21, 2015, at St. Alban's Episcopal Church in Spirit Lake. A memorial visitation will be held Tuesday, from 5:00 p.m. until 7:00 p.m. at the Schuchert-Lentz Funeral Home. Burial will be at Lakeview Gardens Cemetery. In lieu of flowers, memorials may be given in Jim's name to Friends of the Lakeside Lab or the Sanborn Daycare and Preschool.

James W. Cravens, age 95, of Wahpeton, passed away on Saturday, October 17, 2015, at his home in Wahpeton. He was born on January 15, 1920, in Sanborn, Iowa, to John and Dorothy (Daly) Cravens. Jim was united in marriage to Margaret Cary on... View Obituary & Service Information

The family of James W. Cravens created this Life Tributes page to make it easy to share your memories.

Send flowers to the Cravens family.