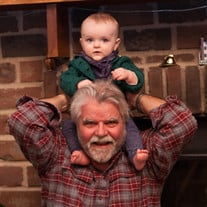 James “Jim” Golden, 66, of Okoboji passed away on Friday, May 24, 2019 at the Avera McKennan Hospital in Sioux Falls from injuries sustained in an automobile accident. A celebration of Jim’s life will be held at 11:00 a.m. Monday, June 24, 2019 at Gull Point State Park. Jim was born July 27, 1952, in Austin, Minnesota, but spent nearly all of his early years in Sioux City. There, he earned the rank of Eagle Scout, graduated from Heelan High School and met his wife Theresa, with whom he’d eventually share 44 years of marriage. After graduating from the University of Iowa, Jim worked as a child abuse investigator in Winnebago County and he and Theresa served as foster parents. The couple moved to Okoboji in 1978, and Jim launched a new career in carpentry. The fingerprints of Jim and Golden Construction are on homes, buildings and landmarks across the Lakes Area, including the Queen II, which he helped build in the mid-1980s. He was a master woodworker with exceedingly high standards – particularly for himself. No matter how small the project, Jim pushed himself to fine-tune his skills and create beautiful and lasting work. Jim prided himself on his gruff exterior, but he cared deeply about the people in his life and in his community. He served for several years on the Okoboji Fire and Rescue Department, including as a diver on its Underwater Search and Rescue team, and on the Okoboji City Council. Jim was a member of the Camp Foster YMCA board, volunteered with Habitat for Humanity, Kindred Hospice and Kinship, and was scoutmaster with Boy Scout Troop 152. Later in his career, Jim turned his attention to energy efficiency in building and affordable housing. He served as executive director of the Energy Efficient Building Association, where he helped write the Energy Star certification program for homes and helped shape the national discussion on sustainability and efficiency in construction. Later, as director of the Lakes Area Community Land Trust, Jim helped secure affordable homes for people of moderate incomes and founded ReNew, a re-used building materials store that helped fund the Land Trust’s work. In his retirement, he built hand-crafted wooden music stands that are used by musicians across the country. Anyone who encountered Jim knew he was a formidable presence with strong opinions on nearly everything, from architectural design to politics to the film catalogue of John Wayne. (In Jim’s house, most major holidays were an occasion for a screening of “The Quiet Man.”) Jim’s greatest pride was his family, who will greatly miss his humor, wisdom and generosity. Jim is survived by his wife, Theresa; daughter Erin (Josh) Zimmerman of Minneapolis; son Ben (Naomi) Golden of La Crosse, Wisconsin; grandson Gus Zimmerman; father James Golden, of Sioux City; and six siblings. He was preceded in death by his mother, Elizabeth Golden.

The family of James "Jim" Golden created this Life Tributes page to make it easy to share your memories.

Send flowers to the Golden family.