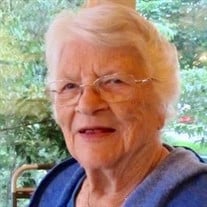 Jean Arthur, 102, of Sun Lakes, AZ formerly of Spirit Lake passed on October 7, 2019 at Renaissance Assisted Living in Sun Lakes, AZ. Jean was born on May 3, 1917 in Ackley, IA to Victor E. and Mabel (Brown) Kachelhofffer. She graduated from Ackley High School in 1935 and earned her teaching degree from Iowa State College in Ames, IA in 1939 where she met her future husband, Bob Arthur. They were united in marriage at her parents’ home in Ackley on August 30, 1940 and celebrated 71 years of marriage until Bob’s death in 2011. Jean briefly taught home economics in Boone, IA where they settled after graduation until Bob’s enlistment in the Navy. After the war they moved to Bob’s family farm in Spirit Lake where she raised her family and had many lifelong friends. After retirement Jean and Bob enjoyed many winters in Sun Lakes, Arizona. Even in her last year’s Jean was happiest around her family and friends, interested in learning and ready for new activities. She was an expert seamstress, enjoyed reading, playing bridge, gardening and traveling. She was a member of many clubs and organizations including PEO, LBU, Book Club, Eastern Star and the Methodist Church in Spirit Lake. She is survived by her three daughters Mary Pollak and her husband Richard of Ipswich MA, Margaret Arthur of Sun Lakes, AZ and Susan Spatz and her husband Martin Spatz of Pound Ridge, NY, four Grandchildren: Christopher Pollak, Carrie Pollak, Lauren Hegyi, Charie Spatz and three great grandchildren. She was preceded in death by her parents, sister, Helen Miner, brothers, Edward Kay and Fred Howard and husband Robert Arthur. A memorial service will be held at a later date. Burial of her cremains will be in the Lakeview Cemetery in Spirit Lake.

Jean Arthur, 102, of Sun Lakes, AZ formerly of Spirit Lake passed on October 7, 2019 at Renaissance Assisted Living in Sun Lakes, AZ. Jean was born on May 3, 1917 in Ackley, IA to Victor E. and Mabel (Brown) Kachelhofffer. She graduated from... View Obituary & Service Information

The family of Jean Arthur created this Life Tributes page to make it easy to share your memories.

Send flowers to the Arthur family.