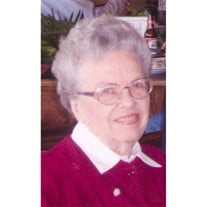 Jean B. Campbell, age 94, of Spirit Lake, passed away Tuesday morning November 12, 2013 at Welcov Assisted Living in Spirit Lake. She was born on February 13, 1919 at Iowa Falls, Iowa, to John and Mayme (Phillips) Brown she being their only child. Jean graduated from Iowa Falls High School in 1936 and attended Ellsworth Jr. College for one year. Following her education, Jean worked in the office of Iowa Electric for six years in Iowa Falls. She married James K. Campbell in December of 1940 in Iowa Falls. Following their marriage, the couple resided in Iowa Falls and Jim was the secretary for the Chamber of Commerce. Jim's chamber work moved them to Marshall, Missouri; Peru, Indiana; and Boone, Iowa. In 1949, the couple bought a bankrupt business in Manchester, Iowa. The couple worked in the veneer and plywood plant they established, until 1970. Jim worked in production and Jean was the bookkeeper. At one time, they had over 100 employees in their plants in Manchester and Monticello, Iowa. They lived on Lake Delhi, where they built their home, from 1955 to 1970. In late 1970, they moved to Mena, Arkansas, where they both became real estate brokers. They purchased a 5th wheel travel trailer and a crew cab truck in 1974 and traveled south in the winter and to Wisconsin in the summer. In 1978 they bought a farm in southern Iowa near Lake Rathbun. They lived there until 1991 when they sold the farm and moved to Okoboji. Jean was always interested in horses and from a young girl at age 3 until Jean and Jim moved to Manchester, her dad always provided ponies and horses. Jim also loved horses, and while in Manchester, they had a stable of saddlebred horses. Jean had no immediate relatives but is survived by many friends. Jean is preceded in death by her husband Jim.

Jean B. Campbell, age 94, of Spirit Lake, passed away Tuesday morning November 12, 2013 at Welcov Assisted Living in Spirit Lake. She was born on February 13, 1919 at Iowa Falls, Iowa, to John and Mayme (Phillips) Brown she being their only... View Obituary & Service Information

The family of Jean B. Campbell created this Life Tributes page to make it easy to share your memories.

Jean B. Campbell, age 94, of Spirit Lake, passed away Tuesday...

Send flowers to the Campbell family.