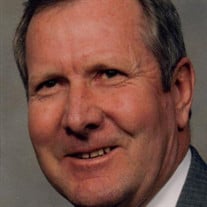 Jerry Lee Schumann, 84, of Okoboji passed away on Friday, March 12, 2021 at Kavanagh House in Des Moines, Iowa. A graveside service will be held at 9:30 a.m. Friday, June 11, 2021 at Lakeview Gardens Cemetery in Spirit Lake. A memorial service will follow at 10:30 a.m. at Immanuel Lutheran Church in Spirit Lake. Jerry Lee Schumann, son of Eldo Schumann and Iva (Grant) Schumann, was born in O'Brien County on March 3, 1937. He attended school in Hartley and Moneta, graduating from Moneta in 1955. He enlisted in the U.S. Navy in June following graduation. After serving his country for four years he lived in California and managed laundry mats for several years. Then he returned to Iowa to farm near Moneta and was united in marriage to Beverly Troff on July 31, 1966. After retiring from farming, he moved to Okoboji. In his retirement he enjoyed spending time with family and friends, reading a good book, and streaming movies. Even when COVID restrictions did not permit him to physically visit the library, he bonded with his IPAD and read many books on it. He loved nature and spent hours on the end of the dock fishing. He enjoyed biking, kayaking, walking the trails and playing cards with friends and grandchildren. Coffee time at a local coffee shop swapping stories about life experiences was always an enjoyable time for Jerry. His love for travel allowed him to spend time in Hawaii, New Zealand, and Japan during his navy years. Travel Highlights of his retirement years were vacations in Alaska, Australia, New Zealand, and Fiji. He was a former member of St Paul’s Lutheran Church in Hartley where he served as an elder and trustee. Presently he was a member of Immanuel Lutheran in Spirit Lake. He will be greatly missed by his three grandchildren who always enjoyed his homemade bread and scrambled eggs. He was preceded in death by his parents Eldo and Iva Schumann, his brother Arvin Schumann, sister-in-law Beverly Schumann, niece Vicky Schumann Weaver and nephew Todd Fisher. Left to cherish his memory are his wife Bev of 54 years, son Jeffrey Lee Schumann and wife Amy of Polk City IA, three grandchildren Mia, Logan and Aidan, nieces Jeannie Stolee of Okoboji, IA, Robin Rowe of Kalamazoo Michigan and nephew Rodney Troff of Trent S.D.

The family of Jerry Lee Schumann created this Life Tributes page to make it easy to share your memories.

Jerry Lee Schumann, 84, of Okoboji passed away on Friday, March...

Send flowers to the Schumann family.