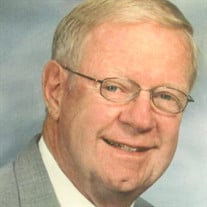 Jerry Lee Starkweather, 81, of Arnolds Park, Iowa passed away on Friday, March 3, 2017 at Lakes Regional Hospital in Spirit Lake, Iowa. Jerry was born on June 12, 1935 in Sioux City, Iowa to Fred and Gertrude Starkweather. He grew up in Boyden, Iowa where he excelled in sports at Boyden High School, graduating in 1953. He elected to further his education at Morningside College where he majored in education and was a multi-year letterman in both basketball and baseball. During his junior year, he started dating Marjorie (Marge) Kathleen Bauer, the woman who became the love of his life. They were married on June 16, 1957. Following college, Jerry coached multiple sports and taught at Ocheyedan High School (1957-1963) and North Fayette High School (1963-1965). He received his Master’s Degree from Colorado State College in 1965 and accepted the position of Junior High Principal at Westwood Community Schools, where he served from 1965 to 1972. In 1972, he became the Elementary Principal at Rock Valley Community Schools, the position he held until he retired in 1997. Jerry was a devoted husband, father, grandfather and friend. He loved spending time with his family, sports, especially golf, enjoying the numerous leagues he played in with his friends, and traveling. He was also active in the Spirit Lake United Methodist Church. Jerry had great Christian faith and had a servant’s heart. His infectious personality, quick wit and love of life will be greatly missed by his family and many friends. He is survived by his wife Marge, sons Randy (Joanna) of Nashville, Tennessee and Scott (Gwen) of Orange City, Iowa, grandchildren Brady Starkweather of Omaha, Nebraska, Trevor Starkweather of Orange City, Iowa and Jena Starkweather (fiancé Jon Nilles) a college junior at Lipscomb University in Nashville, Tennessee, brother-in law and sister-in law Ron and Peg Juffer of Orange City, Iowa and numerous nephews and nieces. He was preceded in death by his parents, his brother F. Thomas Starkweather and sister-in-law Margot Starkweather. Memorial service will be at 11:00 a.m. on Thursday, March 9 at Spirit Lake United Methodist Church. Visitation with family members present will be held on Wednesday, March 8 from 5:00 p.m. to 7:00 p.m. at the Schuchert-Lentz Funeral Home. Interment will be at Lakeview Gardens Cemetery in Spirit Lake, Iowa. The Schuchert-Lentz Funeral Home is assisting the family. In lieu of flowers, donations can be sent to Spirit Lake United Methodist Church Memorial Fund.

Jerry Lee Starkweather, 81, of Arnolds Park, Iowa passed away on Friday, March 3, 2017 at Lakes Regional Hospital in Spirit Lake, Iowa. Jerry was born on June 12, 1935 in Sioux City, Iowa to Fred and Gertrude Starkweather. He grew up in Boyden,... View Obituary & Service Information

The family of Jerry Lee Starkweather created this Life Tributes page to make it easy to share your memories.

Send flowers to the Starkweather family.