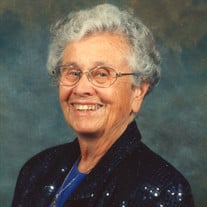 Memorial services for 95 year old Joan “Jo” Williams of West Okoboji will be 10:00 AM on Monday September 5th at Calvary United Methodist Church in Arnolds Park. Burial will be in Waterman Cemetery in Sutherland at a later date. Visitation will be 4:00 – 6:00 PM on Sunday at the Schuchert-Lentz Funeral Home in Spirit Lake. Joan Williams was born on July 24, 1921 to John Dyke and Margaret Ethel Bark in Barrington, Illionis. The family moved to Sioux City, Iowa where Joan attended the Kate Hubbard Nursery School. She received her primary and elementary education at Hunt School in Sioux City. The family next moved back to her parents’ hometown of Sutherland in O’Brien County where she attended junior high and high school, graduating in 1939. Joan went to Iowa State Teacher’s College where she received a B.A. degree in Health and Physical Education. She started her teaching career in 1943 at Alta Consolidated School where she taught Physical Education for 9 years. The next 31 years were spent teaching Health and Physical Education in the Spirit Lake Community Schools. She started the elementary and primary physical education programs at Spirit Lake. She loved all ages of children dearly but her favorite group was the teenagers. She knew each and every student in the whole school by first and last name and could tell you something about all of them. She had many humorous stories about dealing with her “kids”. After 25 years of retirement Jo received a most coveted honor. She was inducted into the Spirit Lake Hall of Achievement for Exceptional Educators. “To teach is to touch a life forever” and “what we do for ourselves dies with us. What we do for others and the world, remains and is immortal”. Jo had a passion for traveling. There are not many places in the world she hadn’t been. Her favorite countries were Australia and Ireland. Of all the exotic places – climbing Ayers Rock, staying in a jungle camp on the Amazon River, climbing Macchu Picchu ruins in Peru, riding the train through Siberia to Lake Baikal, living in yurts in the Gobi Desert, staying in a castle in Wales, standing in awe of Stonehenge in England – her most thrilling tour was sailing to England on the Q.E. II, sightseeing and attending shows in the London area, taking the chunnel train under the English Channel to France, spending three days in Paris, eating dinner at the top of the Eiffel Tower, cruising the Seine in the moonlight, attending the show at the oldest cabaret in Paris – the most exciting thing was flying the Concorde to New York’s JFK in 2 hours and 56 minutes. She even talked the head steward into taking her up into the cockpit! Jo had a wonderful life. She had been a member of P.E.W., Calvary United Methodist Church, University of Okoboji Foundation, Friends of Lakeside Lab, OPA, Humane Society of NW Iowa, Sun City Hikers, CAASA, a charter member of the Chi Chapter of the International Delta Kappa Gamma Society the Coral Chapter Order of the Eastern Star in Sanborn. She had the best of both worlds in her retirement years, living in Arizona in the winter months and spending the rest of the year at her beloved Okoboji. Joan was preceded in death by her parents and a sister, Barbara Bark Williams. In lieu of flowers, memorials may be directed to Calvary United Methodist Church or the Spirit Lake School Foundation.

Memorial services for 95 year old Joan &#8220;Jo&#8221; Williams of West Okoboji will be 10:00 AM on Monday September 5th at Calvary United Methodist Church in Arnolds Park. Burial will be in Waterman Cemetery in Sutherland at a later date.... View Obituary & Service Information

The family of Joan Williams created this Life Tributes page to make it easy to share your memories.

Send flowers to the Williams family.