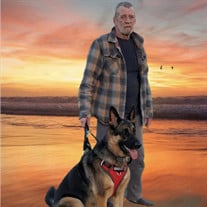 ﻿ John Harold Christopherson , 72 of Okoboji, formerly of Spencer, Iowa passed away on Wednesday February 2, 2022. After a lengthy fight from medical conditions due to Agent Orange. A memorial service will be held at 1:00 pm. Thursday, February 10, 2022, at Downtown Church in Milford, IA. With Pastor Greg Jorgenson officiating the service. All are welcome to a luncheon after the service. Military graveside honors will be conducted by the US. Marine Corps. Honor Guard at the Riverside Cemetery on W. 4th St. Spencer, IA. John was born on February 3rd 1949, to Harold Christopherson and Barbara DeMuth, Kelly in Spencer, IA. He attended School in Quimby, IA. Where he farmed for his family. During the Vietnam War, John enlisted into the US. Marine Corps. Where he was honorably discharged as a wounded warrior after serving his time. He was discharged in Vallejo, CA. at Mare Island’s Naval Base. He went to work as a Motorcycle mechanic and decided to live in Calif. He then went to work at Superior Roofing in the San Francisco Bay Area where he became a Supervisor and later decided to open his own business in American Canyon, CA. His Company there for many years was American Canyon Roofing Inc. He united with wife Kathy-Long on June 11, 1986. In Napa, CA. John and Kathy moved to Spencer, Iowa in 1989 where John opened up his business Christopherson Construction & Roofing Co. Until 2018 when he sold his business after Agent Orange related illnesses. In his spare time he enjoyed family and giving to various charities as well as donating his time to The Lakes Area Dog Park, Spirit Lake, IA. Where he went every morning with his service dog (Gunner) Memorial Funds may be sent to Lakes Area Dog Park, Spirit Lake, IA. Left to Cherish his memory is his wife Kathy Christopherson of Okoboji; his Children Daryl (Lisa) Christopherson of Sioux Falls, SD. Katrina Heller (Alex Henriquez) of Spencer; Michael (Sundae) Long of Grimes, IA; Kelly Brooks of Spencer; 10 Grandchildren; His siblings Dee LeVeque of Sioux City, IA. Larry (Julie) Christopherson of Ruthven; and Jean (Jeff) Reed of Hastings, MN. Many cousins, nieces and nephews. He is preceded in death by his parents and a son James Long, sister Linda Christopherson and a grandson Wilson John Henriquez.

&#65279; John Harold Christopherson , 72 of Okoboji, formerly of Spencer, Iowa passed away on Wednesday February 2, 2022. After a lengthy fight from medical conditions due to Agent Orange. A memorial service will be held at 1:00 pm. Thursday,... View Obituary & Service Information

The family of John H. Christopherson created this Life Tributes page to make it easy to share your memories.

Send flowers to the Christopherson family.