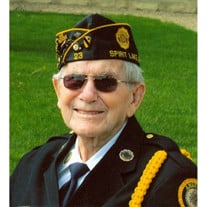 John K. Eckard, age 87, of Spirit Lake, passed away on Monday, January 28, 2013, at the Milford Nursing Center in Milford, Iowa. He was born on September 27, 1925, in Milford, Iowa, to Dana and Bernice (Powell) Eckard. John attended Okoboji High School before serving his country in the United States Army. He was united in marriage to Alice Rasmussen on August 27, 1948, in Sioux Falls, South Dakota. John worked all of his life farming. He was a member of the United Methodist Church, where he served as the Treasurer for the Methodist Men, the American Legion, where he was the Commander for eight years, the V.F.W. and Kiwanis. John enjoyed spending his spare time fishing, golfing, bowling, playing cards and dancing. John is survived by his wife, Alice Eckard of Spirit Lake; daughter, Deanne Eckard of Jeromesville, Ohio; four sons, Dean Eckard, and his wife, Linda of Hanover, Minnesota, Dennis Eckard, and his wife, Kathy of Kansas City, Dana Eckard, and his wife, Elizabeth of Klamath Falls, Oregon, and David Eckard of Portland, Oregon; six grandchildren; and six great-grandchildren. He was preceded in death by his parents; three brothers; and three sisters. A funeral service will be held at 10:30A.M. Thursday, January 31, 2013, at the United Methodist Church in Spirit Lake. There will be one hour of visitation held prior to the service at the church. Burial will be at Memory Gardens Cemetery. The Schuchert Funeral Home is in charge of the arrangements.

The family of John Eckard created this Life Tributes page to make it easy to share your memories.

Send flowers to the Eckard family.