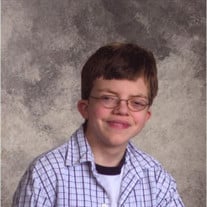 John Claude Fettig: Debater. Historian. Zombie expert. Fighter. Entrepreneur. Dreamer. Adventurer. Explorer. Clever and witty observer. Entertainer. Loving and loyal son. Chief grandchild-in-residence. Rebel. Spiritual. Persistent and determined. Focused on family. Always concerned about those less fortunate. John Claude Fettig, son of Richard Fettig and Betty Timmins Fettig of Milford, IA, began his newest and greatest adventure on February 9, 2014, departing this world to begin exploring the mysteries of infinite time and space. This mission began after he suffered a stroke while at St. Mary's Hospital in Rochester, MN. John began his life's work on April 12, 1988, in Las Vegas, NV, which might explain his adventurous spirit. John had Noonan's Syndrome, which resulted in some physical limitations, but he took them in stride, using his situation as a launchpad for his intellectual growth. A self-taught researcher, John's fascination with history and geography led to his remarkable expertise in these fields. Nor did he allow mere physical limitations to keep him "down on the farm." Driven by his idealism and compassion, John planned and implemented sojourns to San Francisco and New York, where he made his way through city bureaucracies as he researched the potential for establishing a nonprofit organization devoted to helping the poor and the homeless. He also traveled with his father, visiting Canada, Washington, DC, New Mexico, Montana, and, with both of his parents, to Salt Lake City, UT, Phoenix, AZ, to California and to an island in the Puget Sound. Family was very important to John. He particularly enjoyed visiting his aunts and uncles and his cousins, who were distributed throughout the country, but he also relished spending time with his grandparents, Claude and Shirley Timmins of Okoboji. John's relationship with his grandfather was based on learning and fun, with long, meaningful conversations. His far-flung cousins thought of him as their surrogate--representing them as the chief (and only local) grandchild. John's relationships with his cousins' children showed he could enjoy and share ideas and activities with people from age 6 to 86. When John was not busy satisfying his idealistic wanderlust, he worked on his computer, looking for answers to historical questions, parsing current political issues, and seeking victory in a variety of online games. John will be remembered as a dreamer and an adventurer, an entrepreneur and a planner. He entertained those around him with his knowledge, his cleverness and his wit. John's generous spirit and purposeful attitude was always dedicated to helping those less fortunate than he was. He was a loving family member whose memory will be cherished by all of us fortunate to have been touched by his presence and his vision of a world where we all treat each other with respect and caring. John was preceded in death by his beloved grandparents, Claude and Shirley Timmins. John is survived by his parents, Rick and Betty Fettig, and many uncles and aunts and cousins, all of whom loved him and miss him. A celebration of John's life will be held at Schuchert Funeral Home, 2317 32nd Street, Spirit Lake, IA 51360, 6:00 to 8:00 PM, Friday, February 14, 2014. Funeral service will be held at the First Lutheran Church, 1525 Three Cross Road, West Okoboji, Iowa 51351, at 10:00 AM, Saturday, February 15, 2014. In lieu of flowers, a memorial fund is being established to benefit homeless people, a cause dear to John's heart.

The family of John Claude Fettig created this Life Tributes page to make it easy to share your memories.

Send flowers to the Fettig family.