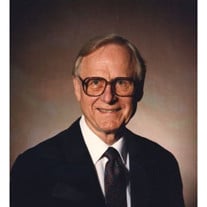 John Samuel Holtze has gone to The Lord after a long illness on July 11 of 2013. John was born on October 4, 1923 to Harry and Ruth Holtze in Sioux City, Iowa. He graduated from Central High School in Sioux City, and attended Iowa State University for one year where he joined the SAE Fraternity, before receiving his appointment to West Point Military Academy. He graduated from West Point in 1945 as a pilot and spent two years on Guam and in the Philippines in the Pacific Theatre before being stationed in San Angelo, Texas at Goodfellow Air Base. It was there that he met and married Julie Matlock in 1949. John then retired from the Service and joined his father in Sioux City as a partner in H.S. Holtze Construction Company. His two brothers, H.S. Jr. and David were all involved for over forty years covering the Midwest states. John's grandfather, Samuel, had come to this country from Sweden and started the company in Sioux City. John served as President of Holtze Construction Company for over twenty years. In 1971, John formed Midstates Development Company, a development and property management company and served as President until this past year. John served as President of the Iowa Master Builders and was a member of Associated General Contractors and served on several of its committees. He was the first board member of Gateway Computers in its infancy, served on the Board of Directors of Morningside College, Toy National Bank and Norwest Bank, the Sioux City Country Club, was President of the board at Trinity Lutheran Church and was a member of the Rotary Club. John had a deep love of his country and a sense of commitment to the Military Academy at West Point and served on the Iowa committee to interview and choose the future West Point Appointees from Iowa. He was a lifelong active member of the Republican Party. John always had a love of athletics and was very active in track and field and baseball as a young man. He was on the track and field team at West Point. And as an adult he loved playing golf and tennis. John will be remembered for his honesty and integrity in business and in life, his loving and fun personality and love of his family. And, as a friend recently wrote, "John was a real Prince of a man who showed us men how a man should lead his life." He always had a very strong Christian faith. John and Julie loved to travel and enjoyed many wonderful experiences throughout the world together and at home with friends. Survivors include his wife, Julie, his three children including son, Dr. John William (Bill) Holtze of Des Moines, Iowa, and his wife Mary, daughter Robin Mahan of Kerrville, Texas and daughter Andrea Waitt Carlton of Nashville, Tennessee and her husband Rick Carlton, six grandchildren, Carla Holtze, Colin Holtze, Bill Holtze, Eliza Mahan, Samuel Waitt and Wesley Carlton, and John's brother David Holtze of Sioux City.

John Samuel Holtze has gone to The Lord after a long illness on July 11 of 2013. John was born on October 4, 1923 to Harry and Ruth Holtze in Sioux City, Iowa. He graduated from Central High School in Sioux City, and attended Iowa State University... View Obituary & Service Information

The family of John S. Holtze created this Life Tributes page to make it easy to share your memories.

John Samuel Holtze has gone to The Lord after a long illness...

Send flowers to the Holtze family.