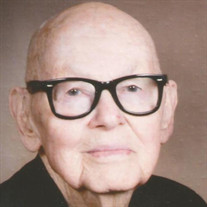 John McGraw “Jack” Hardie, 92, of Spirit Lake, Iowa, formerly of Sioux City, LeMars and Waterloo, died on February 12, 2021 peacefully at home. Jack was born May 24, 1928 in Sioux City, the son of John Pollack and Helen McGraw Hardie. He attended Sioux City schools and graduated from Central High School in 1945 and from Iowa State University in 1950. He served in the US Army 1946-47. He married Jean Waters in 1958. He was employed by Iowa Public Service in engineering and management for 35 years, retiring in 1991 to Lake Okoboji. Jack was active in activities including football in high school and was a member of Sigma Nu Fraternity at ISU. He was an Eagle Scout and Scout Master. He was President of the Sioux City JayCees. In his work he was active in local, state, regional and national utility groups. He was a member of Rotary in Sioux City, LeMars, Waterloo and Spirit Lake. He enjoyed his family, friends, golf, fishing, bridge and outdoor activities. Jack is survived by his daughters Jill Uland of Kansas City, Sara Dann (Kirk) of Minneapolis, granddaughter Emily Beemer (Jeramy) and their sons Henry and Jack, nephew Scott Davison (Nicki), niece Barbara Hunt (Paul), children from his first marriage Tom Armstrong (Maribeth), John Armstrong, Cecelia White, 5 grandchildren and 7 great grandchildren. Jack is preceded in death by his wife Jean, son-in law Mark Uland, grandson Henry Armstrong, father John, mother Helen, brother-in-law Joseph Davison, sister-in-law Joan Davison, and family friends Janice Davison and Tom Brodie. There will be a private service for Jack and his wife, Jean. Inurnment will be in the Kingsley Cemetery. A recording of their service will be available on March 18th at the following link: https://www.3cross.org/jack-jean-hardie-memorial-service/

The family of John "Jack" McGraw Hardie created this Life Tributes page to make it easy to share your memories.

Send flowers to the Hardie family.