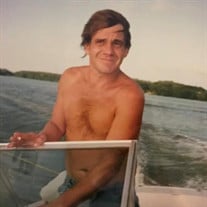 John Alan Logan the son of John and Darlene (Vigdal) Logan was born January 15th, 1959 in Estherville, IA. Avid fisherman, country-side cruiser, and music lover peacefully passed away in his home surrounded by family on October, 9th, 2021 at age 62 after a courageous battle of metastatic cancer. The way that he died is just like he lived: he wrote his own rules, always stayed strong and paved his own way.After John received his education from Estherville High School, he went to Colorado where he helped build log homes, with various jobs following. His last place of employment was Rim & Wheel/GKN where he dedicated 18 years of service. John’s biggest and most rewarding accomplishment was marrying his best friend and partner in life, Rose (Clark) Logan. Together, they had 2 children: Jamey and Misty. He was also blessed with 2 grandchildren who were his pride and joy, Hayden Halbur and Bentlee Adams. Most of whom remember John will know him for his unsurpassed passion for music. He loved jamming out, singing, and sharing his favorite songs with family and friends. Family and friends played a very big part in John’s life. He spent much of his time telling stories, laughing, and joking around – usually around a campfire at his sister Bobbi Jo’s back yard, at family get-togethers, or camping at a lake. If he wasn’t listening to music or working around the house, he could be found cruising the dirt roads or at one of his many fishing spots along nearby rivers and shorelines. Family and friends knew him as John “Lunk” Logan of whom many he taught how to fish. As much as he enjoyed time with family, he also cherished his alone time mowing the lawn, cleaning the garage, a little more fishing, and taking his infamous hour-long baths to get the day started. John is survived by his partner in life, Rose Logan; children, Jamey (Davina) Logan and Misty Logan; grandson Hayden Halbur and Bentlee Adams; sisters, Bobbi Jo Dalen and special friend Scott Still, Sheri (Larry) Jensen, Patricia Von Behren; brother Dennis Logan; and many nieces, nephews, and friends.He has been proceeded in death by his parents John and Darlene Logan; sister-in-law, Sandra Logan; brother-in-law, August Von Behren; nephew, Larry Jensen Jr; and infant granddaughters; Della and Jayden Logan. Blessed be their memory.

The family of John Alan Logan created this Life Tributes page to make it easy to share your memories.

John Alan Logan the son of John and Darlene (Vigdal) Logan was...

Send flowers to the Logan family.