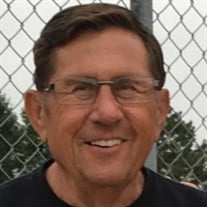 John Pas of Milford, formerly Sioux City. 80, passed away on Thursday, July 29, 2021, at Lakes Regional Healthcare Hospice in Spirit Lake, Iowa. John was born on December 4, 1940, in Spencer, Iowa, the son of Wesley and Marjorie Pas. He was raised in Sioux City, IA and graduated from East High School. John was an outstanding high school athlete participating in football, baseball, and hockey which lead to his career choice of being a teacher and coach. He received multiple awards and was All State in football. He attended the University of Iowa, obtained his B.A from Morningside College and M.A from the University of South Dakota in education. He met and married his best friend and only love, Karen Stientjes in High School. They were married over 50 years before her passing. Together, as educators, they made it their life’s work to mold and inspire future generations. During that time they made their home in Sioux City raising their two children and later moved to the Lakes area in retirement to be closer to family. During his career John taught Algebra and Geometry. He coached football, wrestling, and girls track before becoming a principal. In 1995 he was awarded Assistant Secondary Principal of the year by the school administrators of Iowa. Extremely talented in the field of computer programing he designed several programs used throughout the Sioux City school district. Always there to support the students, he set high standards for himself and lead by example. He would claim he was not good at reading and writing however, he won a literacy award for writing a poem about “Candy Bars” confirming he would be a Cherry Bing. His greatest joy was his family and he prided himself in spending time and sharing life experience and grandfatherly advice with the grandkids. John was passionate about golf, computers, gardening, cheering on the Hawkeyes and spending time with his dog and constant companion, Molly. He is survived by his children, Randy (Amy) Pas, Teri (Chris) Pieters and four grandchildren, Jaci Pieters, Kiah Pieters, Tara Pas, Sam Pas, Brother Rick (Cheryl) Pas, sisters Betty (Fran) Parrish and Lynn Porter and several nieces and nephews. John was preceded in death by his wife Karen, parents and sister Kay.

John Pas of Milford, formerly Sioux City. 80, passed away on Thursday, July 29, 2021, at Lakes Regional Healthcare Hospice in Spirit Lake, Iowa. John was born on December 4, 1940, in Spencer, Iowa, the son of Wesley and Marjorie Pas. He was... View Obituary & Service Information

The family of John Wesley Pas created this Life Tributes page to make it easy to share your memories.

John Pas of Milford, formerly Sioux City. 80, passed away on...

Send flowers to the Pas family.