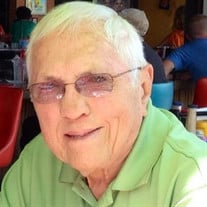 John Allen Walston, 93, of Okoboji, passed away on Sunday, December 2, 2018 at his home in Okoboji. A memorial service will be held at 11:00 a.m. Friday, December 7, 2018 at the Schuchert-Lentz Funeral Home in Spirit Lake. Visitation will be one hour prior to the service at the funeral home. Military funeral honors will be conducted by the American Legion Timpe Post 23. He was born on February 23, 1925 in Spirit Lake, IA to Clarence and Vera (White) Walston. He had a twin brother James (Jim) who passed away in 2014. John was a member of the Spirit Lake Indians High School basketball team that reached the Boys State Basketball Tournament in 1942. After graduating from high school in 1943, he enlisted like many others, in the Army and served as a corporal in the Army Corp of Engineers stationed in Guam. After the war, John attended college starting at USC and then finishing up his degree in 1949 at Iowa State Teachers College. He then completed his Master’s Degree at USC and served as a public high school English and Social Studies teacher in Downey, CA, Des Moines, IA and over 30 years in the Minneapolis Public Schools. John was married for 63 years to his wife and best friend Shirley (Tank) Walston. They raised three children. He enjoyed his family, travels to Arizona in the winter, golf and his lifelong love of the Lakes Region in Iowa. He is survived by his wife Shirley, son John Jr., daughters Cindy Armstrong and her husband Tom, Lisa Sharp and her husband Donald, and step-grandchildren Nika Calvin (husband Garth) and Tegan Swedzinski (husband Jesse) and step-great grandchildren Gage, Kingsley, Oakley, Caiden and Lexi.

John Allen Walston, 93, of Okoboji, passed away on Sunday, December 2, 2018 at his home in Okoboji. A memorial service will be held at 11:00 a.m. Friday, December 7, 2018 at the Schuchert-Lentz Funeral Home in Spirit Lake. Visitation will be... View Obituary & Service Information

The family of John Allen Walston created this Life Tributes page to make it easy to share your memories.

John Allen Walston, 93, of Okoboji, passed away on Sunday, December...

Send flowers to the Walston family.