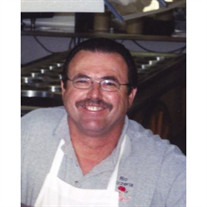 Joseph James De Young, age 65, of Spirit Lake, passed away on Wednesday, September 11, 2013, at his home in Spirit Lake. He was born on July 3, 1948, in LeMars, Iowa, to Joseph and Charlotte De Young. Joe remained in Iowa, until the age of eight, when his parents moved to California. He graduated from David Starr Jordan High School. Joe came from a family of cooks and he was a meat cutter for thirty years, where he developed a passion for cooking. In 1993, he moved back to Iowa, where he developed his entrepreneur skills. He raised rats for reptile food, owned and operated Joe's Septic Service, owned and operated the Spillway Drive-In and Rio Pizzeria, where he made many friends and awesome pizzas. Joe enjoyed spending his spare time fishing, golfing and watching any and all sports. He loved being with his family, but most of all, he was known for sharing his love of food with others. Joe is survived by his wife, Pam De Young of Spirit Lake; daughter, Tina Marie De Young-Moos, and her husband, Mike of Victorville, California; son, Joseph James De Young Jr., and his fiancé, Juliet Berkanyi of Hesperia, California; step-son, Stephen Charles Moreno, and his fiancé, Arith Rodriquez of Ontario, California; sisters, Sandra Phelps, and her husband, Steve of Sioux City, Nancy Smithson, and her husband, George of LeMars, and Janet Vlotho, and her husband, Jay of Ireton, Iowa; brothers, Richard De Young, and his wife, Donna of Riverside, California, and Myron De Young, and his wife, Heidi of Mesa, Arizona; grandchildren, Michael Howe, Hailey Moreno and Hannah Moreno; and many nieces and nephews. He was preceded in death by his brothers, Milo De Young and Vernon De Young. A memorial service will be held at 11:00A.M. Friday, September 20, 2013, at the Faith Evangelical Free Church in Spirit Lake. In lieu of flowers, memorials may be given in Joseph's name. The Schuchert Funeral Home is in charge of the arrangements.

Joseph James De Young, age 65, of Spirit Lake, passed away on Wednesday, September 11, 2013, at his home in Spirit Lake. He was born on July 3, 1948, in LeMars, Iowa, to Joseph and Charlotte De Young. Joe remained in Iowa, until the age of eight,... View Obituary & Service Information

The family of Joseph De Young created this Life Tributes page to make it easy to share your memories.