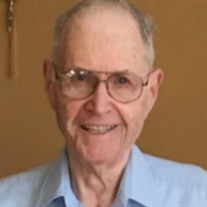 Joseph M Rooney, of Olathe, KS, formerly of Spirit Lake, IA and Algona, IA, entered eternal rest on the morning of February 28, 2018. Relatives and friends are invited to attend a Funeral Mass for Joe on Friday, March 2nd, 2018, at 10:30 a.m. at Prince of Peace Catholic Church in Olathe, Kansas. Visitation and Rosary will start at 9:00 a.m. at the church on Friday. Military Graveside Rites will be conducted by the American Legion Timpe Post #23 and the VFW John W. Kidd Post #4514 in the St Margaret’s Cemetery in Spirit Lake, Iowa on Saturday, March 3rd, 2018 at 10:30 a.m. followed by a luncheon at the St Mary’s Parish Hall in Spirit Lake. The Schuchert-Lentz Funeral Home in Spirit Lake is in charge of arrangements. Online condolences may be sent to www.spiritlakefuneralhome.com Joe was born on born February 16, 1927, the second son of Virgil and Marguerite Rooney. He enlisted in the U.S. Army Reserves, Pre-Engineering Program at the University of Nebraska, Lincoln. Active duty from 1945 to 1951. Attended Creighton University and Medical School in Omaha, NE 1948 to 1955, obtaining his Medical Degree. Interned at Saint Catherine’s Hospital, followed by private General Family Practice in Algona, Iowa for 36 years having delivered 1509 babies. Retired and moved in 1992 with his wife Jean to Spirit Lake, Iowa. He was a 3rd Degree member of the Knights of Columbus, the Phi Chi Medical Fraternity, active in the Republican Party, and the Spirit Lake American Legion. He enjoyed his grandchildren, playing cards, working jigsaw and crossword puzzles, golfing and fishing. Preceded in death by his wife, of 49 years, Jean M. Wagner married June 14, 1952. Jean died 6/13/01 on the eve of their 49th wedding anniversary. They raised 6 children: Timothy, Michael, Patrick, Kathleen, Shawn, and Paula. (lost 1 daughter at term pregnancy.) They had 18 Grandchildren and 32 Great-Grandchildren. He married Dora E. Baum on 8/14/04, she preceded him in death on 2/25/17 after 13 years of marriage. He is also survived by 4 brothers and 2 sisters. In lieu of flowers, the family wishes donations to be sent to the building fund of his parish St. John Paul II Catholic Church in Olathe, Kansas, St. Mary’s Catholic Church in Spirit Lake, IA or Bishop Garrigan High School in Algona, IA.

The family of Dr. Joseph M. Rooney created this Life Tributes page to make it easy to share your memories.

Send flowers to the Rooney family.