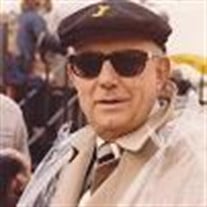 Julian Chrischilles, 90, of Spirit Lake passed away on Saturday, August 5, 2017 at Lakes Regional Health Care in Spirit Lake. Services for Julian will be held at 2:00 p.m. on Wednesday, August 16, 2017 at St. Alban’s Episcopal Church in Spirit Lake. There will be a visitation one hour prior to service time on Wednesday the 16th at the church. Burial of his cremains will be in the St. Alban’s Church Columbarium. Julian Theodore Chrischilles was born on August 7, 1926 in Algona, Iowa. The third son of Theo and Irene Chrischilles. While in fifth grade, he and the late Bill Fuller both played the clarinet with such efficiency that they played in the Algona High School band. The pair later teamed up to build and operate a lighted golf driving range north of Algona (where Kmart is now located) when they were sophomores in high school. It was a good lesson in economics for them, they netted $25 for their Summer’s work. After graduation from high school, Julian enlisted in the Navy and was sworn in on his 18th birthday. He was discharged in July 1946 and then enrolled at Beloit College in Wisconsin, where his father and two brothers had attended. While at Beloit, he worked in the college publicity office and also was a part-time sports writer for the Beloit Daily News. After graduation, he returned to Algona and joined the Kossuth County Advance newspaper, where he had interned during two previous Summers. On June 16, 1949, he was married to Patricia Seeley in St. Paul, Minnesota. The couple lived in Algona until building a home on West Okoboji in 1986 before settling on a condo on East Okoboji. During his years with the Advance, the paper won numerous state press awards and twice Julian was honored as Master Journalist by the state association. In 1970, the two Algona papers merged and Julian left the newspaper business in 1975 but retained his 40% interest in the Algona Publishing Co for a number of years. For 10 years he represented the Directory Service in 22 Western and Central Iowa counties. He retired in 1985 but resumed selling in 1995 for the Farm & Home Publishing Co. of Belmond, Iowa, He was an avid golfer for most of his life and in 1959 won the Algona Country Club championship. He recorded 4 hole-in-ones during his life. During his years in Algona he served as president of the Vocal and Instrumental support organization of the high school and the group brought many name bands to Algona during the time. He was also a member of the Kiwanis Club, Episcopal Church, Algona Jaycees and for several years had a five minute news program on Fairmont radio station KSMN. He also coached little league for many years. He is survived by three sons, Steve and David of Algona and John of Spencer, Iowa, and daughter Sarah of Whitefish, Montana. There are two grandsons also surviving, Sean and Austin Jacobson. He was preceded in death by his wife of 65 years, Patricia, who died in 2014 and two brothers, Jack and Ted, who operated the Chrischilles Store after WWII, a store founded by their great grandfather in 1870. Also preceding him in death were his parents and one sister, Ruth Ann, who died of a childhood disease at the age of 9.

The family of Julian Chrischilles created this Life Tributes page to make it easy to share your memories.

Julian Chrischilles, 90, of Spirit Lake passed away on Saturday,...

Send flowers to the Chrischilles family.