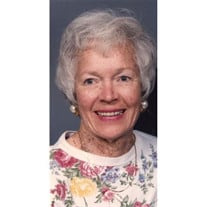 Julie Harvey Bowers, age 88, of Okoboji, Iowa passed away Thursday, March 20, 2014 at the Milford Nursing Center in Milford, Iowa. She was born on April 14, 1925 in Kansas City, Missouri to Howard and Juliet (Proudfit) Harvey. Julie graduated from Monticello College and then attended the University of Iowa where she was a Phi Beta Kappa and member of the Kappa Kappa Gamma sorority. She graduated in 1947. At the University of Iowa she met James R. Bowers whom she married on August 18, 1947 in Spencer, Iowa. Jim and Julie owned and operated Bowers Clothing Store in LeMars for 35 years. In 1985, Jim and Julie moved to West Lake Okoboji where Julie enjoyed golfing, boating, playing bridge and mahjong, in addition to spending time with family and friends at the lake. She was a member of the Okoboji Yacht Club where she began racing sailboats as a teenager. She was a member of St. Alban's Episcopal Church in Spirit Lake where she taught Sunday school and was active in the altar guild. Julie was past-President of TTT and PEO. Julie also served on the military academy selection board for the sixth district. Julie is survived by her three sons, James R. Bowers, Jr., and his wife Jodie, of West Des Moines, Iowa; Daniel H. Bowers and his spouse, Steven Weissman, of New York City, New York; and Peter C. Bowers and his wife, Monika Fleshner, of Boulder, Colorado; five grandchildren, namely Heather Pride and her husband, Russell Pride of Pleasant Hill, Iowa; Hana Bowers of Melbourne, Australia, formerly of West Des Moines, Iowa; Samuel and Charles Bowers of Boulder, Colorado; and Ethan Brady-Weissman of New York City, New York; and a great-granddaughter, Sydney Pride, of Pleasant Hill, Iowa. Julie was preceded in death by her parents and her husband, Jim, who died on April 29, 2004 in Spirit Lake, Iowa. Julie will be fondly remembered as a wonderful spouse, mother, grandmother, great-grandmother and friend. A memorial service will be held at 1:00P.M. Friday, March28, 2014, at St. Alban's Episcopal Church in Spirit Lake. A memorial visitation will be held Thursday, from 4:00P.M. until 6:00P.M. at the Schuchert Funeral Home.The Schuchert Funeral Home, Spirit Lake, Iowa is in charge of the arrangements. Memorial donations may be given in Julie's name to St. Alban's Episcopal Church, Spirit Lake, Iowa.

The family of Julie H. Bowers created this Life Tributes page to make it easy to share your memories.

Send flowers to the Bowers family.