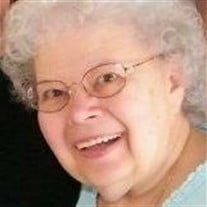 Karen Marie Huffman, 79, of Spirit Lake passed away on Wednesday, October 18, 2017 at Lakes Regional Health Care in Spirit Lake, Iowa. A memorial service will be held at 11:00 a.m. on Saturday, October 21, 2017 at the Schuchert-Lentz Funeral Home in Spirit Lake. A visitation will be held one hour prior to service time on Saturday at the funeral home. A graveside service will be held at 4:00 p.m. on Saturday in the Oak Hill Cemetery in Anthon, Iowa. The Schuchert-Lentz Funeral Home in Spirit Lake is in charge of arrangements. Online condolences may be sent to www.spiritlakefuneralhome.com She was born on July 23, 1938 to Frances Evelyn Drossel Etler and Wayne Alfred Etler. She attended country grade school and high school in Anthon, Iowa. She was raised on the family farm in Anthon until she left home in 1954. Karen was married later that year to Marvin Larry Huffman on November 26, 1954 in Pocatello, Idaho. Together the couple worked construction from 1954 to 1961 living in Chicago, Iowa, South Dakota and Kansas until settling down in Sioux City, Iowa in the early 60’s till 2010 when they moved to Spirit Lake, Iowa. In the 1970’s they started the very first home cleaning service in Sioux City and continued to operate it until the 1990’s when they sold the business. Karen and Larry then went into the rental property business until they sold their last one in 2005. Eventually they retired to Iowa Great Lakes area where they spent their retirement boating and spending time creating memories with family and friends. She dedicated her time raising and being a homemaker to her four children. The family enjoyed spending summers vacationing, boating and camping in the Iowa Great Lakes. During the school year she was a Girl Scout Leader. Karen enjoyed cooking for her kids and grandkids. Those left behind to cherish the wonder memories she made are her three sons Darryn Huffman of Richardson, TX; Mark (Susie) Huffman of Kerrville, TX; and Brett Huffman of Sioux City; daughter Kim Schniebs of Spirit Lake, IA; brothers Larry (Jo) Etler of Moville, IA and Jim Etler of Parshall, CO; eight grandchildren, Brittany, Amanda, Shelby, Savannah, Sierra, Larissa, Michelle, Alisha and eleven great grandchildren. She was preceded in death by her parents and her husband of 62 years.

Karen Marie Huffman, 79, of Spirit Lake passed away on Wednesday, October 18, 2017 at Lakes Regional Health Care in Spirit Lake, Iowa. A memorial service will be held at 11:00 a.m. on Saturday, October 21, 2017 at the Schuchert-Lentz Funeral... View Obituary & Service Information

The family of Karen Marie Huffman created this Life Tributes page to make it easy to share your memories.

Karen Marie Huffman, 79, of Spirit Lake passed away on Wednesday,...

Send flowers to the Huffman family.