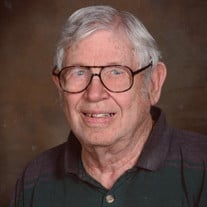 A memorial service for Lane will be held at 10:30 a.m. on Saturday, August 12, 2017 at St. Alban’s Episcopal Church in Spirit Lake with Father Tom Early officiating. A visitation will be held one hour prior to the service at the church. Military Funeral Honors will be performed by American Legion Timpe Post #23 and the John W. Kidd VFW Post #4515 at the St. Alban’s Episcopal Church Columbarium. The Schuchert-Lentz Funeral Home in Spirit Lake is in charge of arrangements. Online condolences may be sent to www.spiritlakefuneralhome.com Lane was born on November 10, 1925 in his family’s home in Spencer to Sumner and Bertha (Miller) Kunath. He graduated from the Spencer High School in 1943. After graduation, he enlisted in the US Navy during World War II. He reported to boot camp and Radio School in Farragut, ID. He served his country during the battles for Iwo Jima and Okinawa on the USS Hinsdale APA-120. He witnessed the flags go up at Iwo Jima. Lane was honorably discharged as a Radio Man 2/C on Sunday, Mother’s Day May 12, 1946. He was a Life Member of American Legion Post #1 and Life Member of VFW Post #3159 Clay County. After returning home from the war, Lane attended and graduated from Jewelry Repair at the Kansas City School of Watchmaking and the School of Watch Making at Elgin Watchmakers College in Elgin, IL. He worked in Waterloo, Webster City and Spencer. He was untied in marriage to Lorma Robinson on November 24, 1949. She preceded him in death on October 7, 1993. Lane was a on the Iowa State Board of Examiners in Watchmaking. He was also a member of British Horological Institute, Civil Air Patrol and served as a Lieutenant in the 50’s. He was aa Advanced Class Armature Radio Operator, licensed in 1961. He also served as a Storm Watcher for many years on Amateur Radio. Lane climbed and erected many towers for HAMs and other radio installations. He is survived by his sons David (Kristin) Kunath of Mankato, MN; and Mark Kunath of Brownton, MN; grandsons, Benjamin and Even Kunath, Nick Kunath, granddaughter Allison Kunath and sister in law Bonnie Kunath of Spencer, IA. He was preceded in death by his parents, wife, brother H. Kay Kunath and infant brother.

A memorial service for Lane will be held at 10:30 a.m. on Saturday, August 12, 2017 at St. Alban&#8217;s Episcopal Church in Spirit Lake with Father Tom Early officiating. A visitation will be held one hour prior to the service at the church.... View Obituary & Service Information

The family of Karlton Lane Kunath created this Life Tributes page to make it easy to share your memories.

Send flowers to the Kunath family.