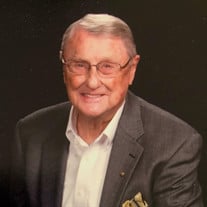 Keith Merlyn Oostenbrug of Spirit Lake, Iowa, died June 27, 2021, at age 85. Keith was the youngest of twelve children born to parents Jennie and Gerrit Oostenbrug in rural Primghar, Iowa, on November 14, 1935. He lost his mother as a young boy and his father as a young teen. He was raised and supported by his extended loving family in Northwest Iowa. He graduated from Primghar High School in 1953 and holds the Iowa Track and Field title for longest Football Throw. He attended Buena Vista College in Storm Lake, Iowa in 1953 and 1954. He attended the American Institute of Business in Des Moines in 1955. He married Carol Jean DySard in 1956. They raised their family in Sioux City, Iowa, and retired to their Center Lake home in Spirit Lake in 1999. Keith spent his early years working for Federated Insurance Company. Mid career he worked several years in Industrial Sales for Diamond Vogel Paint from Orange City, Iowa, covering a four state region. He ended his working years as a Certified Financial Planner for IDS in Sioux City and then LeMars Bank and Trust. Keith was an active member of First United Methodist Church in Sioux City and Spirit Lake United Methodist Church. He particularly enjoyed his Men’s Group and Sunday school class in recent years. He was an active Siouxland Optimist and Sioux City Lions Club and Spirit Lake Kiwanis Club member. In July of 1970, Keith survived a brain aneurysm. Thanks to the encouragement from a local neurosurgeon and the generosity of friends and church family, he was able to go to Zurich, Switzerland, to have surgery performed by a pioneer in the very early days of using a microscope in brain surgery. The kindnesses received in those days was never forgotten by his family. Keith loved meeting new people and never met a stranger. He had an uncanny memory for names and faces and loved telling people’s stories. He loved fishing and golf and playing cribbage with his friends and family. He was the most attentive and loving host. He is survived by his loving wife Carol, after celebrating 65 years of marriage in January, and his five children and their families: Susan and Michael Ferris, Jeffrey Oostenbrug, Joel and Teresa Oostenbrug, Laura Musselman, and Thomas and Pamela Oostenbrug. He is survived by grandchildren Thomas and Erin Ferris, Adam Ferris and Chandi Nicholson, Jenna and Ferrell McGhee and Grant Ferris; Becky and Grant Glover, Katy and Nathan Willingham and David Oostenbrug, Kelly and Josh Knaack, Patrick and Arielle Sachau and Sara and DJ Anderson, Natalie Oostenbrug and Raechel Oostenbrug. He is survived by sixteen great grandchildren, sister and brother-in-law Edy and Don Kammerer and many beloved friends. Special thanks to the dedicated staff at Lakes Regional Healthcare for their compassion and care. Memorials to Lakes Regional Healthcare designated for Hospice Care in Spirit Lake, Iowa. A memorial service will be held at 10:00 a.m. Thursday, July 1, 2021 at the Spirit Lake United Methodist Church. Visitation will be held from 5-7 p.m. on Wednesday, June 30, 2021 at the Schuchert-Lentz Funeral Home in Spirit Lake. Burial will be held at a later date in the Memorial Park Cemetery in Sioux City, IA. Arrangements are under the direction of the Schuchert-Lentz Funeral Home in Spirit Lake. Online condolences may be left at www.spiritlakefuneralhome.com

Keith Merlyn Oostenbrug of Spirit Lake, Iowa, died June 27, 2021, at age 85. Keith was the youngest of twelve children born to parents Jennie and Gerrit Oostenbrug in rural Primghar, Iowa, on November 14, 1935. He lost his mother as a young... View Obituary & Service Information

The family of Keith Merlyn Oostenbrug created this Life Tributes page to make it easy to share your memories.

Send flowers to the Oostenbrug family.