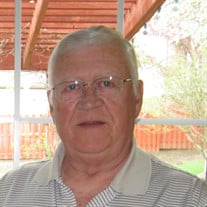 Keith Robinson, 74, of Manchester, IA passed away on Thursday, April 2, 2020 at his home in Manchester. A memorial service will be held at a later date. Burial will take place in the Oakland Cemetery in Manchester, IA. Keith was born on October 13, 1945 in Manchester, IA to Walter L. and Alice V. (Wolfe) Robinson. He attended school in Dundee, IA until the school was closed and consolidated with the Manchester school system. After he graduated from Manchester High School in 1963, he enrolled and played football for Wartburg College. Keith left college in 1965 to serve his country in the US Navy during the Vietnam War. He served for 3 years overseas as a Communication Technician based out of Yokosuka, Japan and Rhoda, Spain. When Keith returned home from the service he was united in marriage to Linda L. State on September 8, 1973 at First Lutheran Church in Manchester. Keith spent his career working in the manufacturing industry retiring from CEI Pacer as the Plant Superintendent in Cedar Rapids in 2009. Community service and volunteerism was important to Keith. He dedicated over 20 years to the Boy Scouts of America serving in key leadership roles at the local, council, regional and national levels. Throughout his life Keith enjoyed endless hours of woodworking, hunting and fishing. Deer hunting and everything associated with it was Keith’s passion. Every fall and winter you could find Keith sitting in a tree waiting for that big buck to walk by. He shared that passion with his two sons and grandchildren. After retirement he spent his days enjoying life on the family acreage in Dundee with Linda. They spent their retirement camping, making countless fires and feeding the wildlife on the farm. Left to cherish his memory is his son, Kevin (Becky) Robinson of Spencer, IA and their children Morgan and Brody; son Korey (Kerri) Robinson of Spirit Lake, IA and their children Spencer, Tyson, and Jasper; brother Kyle (Christine) Robinson of Cedar Rapids, IA; sister-in-law Erma Robinson of Manchester, IA; sister-in-law Donna (Merle) Pierce-Robinson of Manchester, IA; and many nieces and nephews. He was preceded in death by his parents, wife, brothers Cal and Gary Robinson.

Keith Robinson, 74, of Manchester, IA passed away on Thursday, April 2, 2020 at his home in Manchester. A memorial service will be held at a later date. Burial will take place in the Oakland Cemetery in Manchester, IA. Keith was born on October... View Obituary & Service Information

The family of Keith B. Robinson created this Life Tributes page to make it easy to share your memories.

Keith Robinson, 74, of Manchester, IA passed away on Thursday,...

Send flowers to the Robinson family.